NEXT:Stephanie Ruhle Stands By Trump-Tillerson Story: 'My Source Didn't Just Say He Called Him a Moron, He Said an F-ing Moron'
PREVIOUS:Fox & Friends First Will Expand to Two Hours 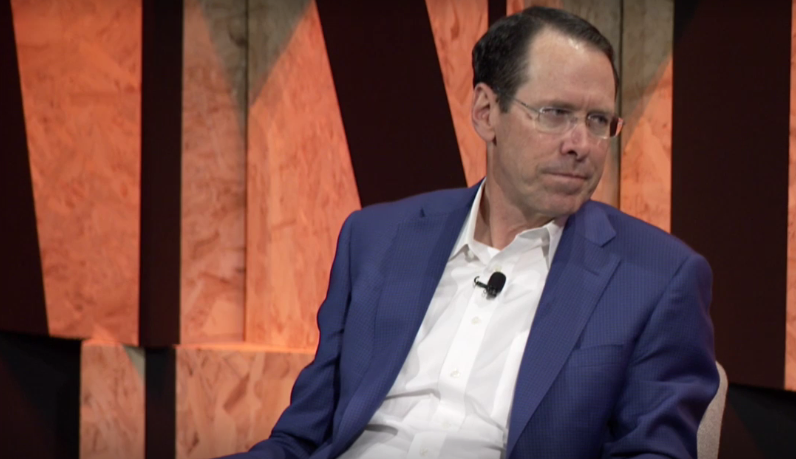 Titans of industry have been making news this week at media business conferences.

Stephenson told Vanity Fair deputy editor Stephanie Mehta during his Wednesday session at the summit that Time Warner brands like HBO shouldn’t worry about editorial interference from AT&T once the merger goes through because, “I have full awareness that I’m not a media tycoon.” Stephenson also lamented the advertising load in the entertainment and media, and said he wants the company to create more ad value from fewer spots during shows.

Stephenson was also asked about CNN and the future CNN worldwide president Jeff Zucker post-merger: “I’ve done hundreds of billions of dollars of deals in my career, and we always pay premiums to get key assets. These are well-run businesses and the priority is not to screw the business up. CNN is doing a lot of good things, and the hope is to keep the key management teams in place.”

That said, Stephenson didn’t explicitly say the word “yes” in his answer to the question of whether or not Zucker specifically will keep his job post-merger, and mentioned that there will likely be some changes due to the “magnitude of such deal.”

On guns and gun control, post Las Vegas, Stephenson wasn’t quite as candid as Iger, and on the role of CEO Stephenson said: “I don’t have an affinity of the moralizing CEOs, and I’m not sure all CEOs have the moral ground. Do I need to come out and speak on every social issue that comes along? Well, we have really large employee bases, so that the extent that it impacts my employees, I do have an obligation to.”

Iger made the most news at his session on Tuesday, wading into what are generally uncharted waters for the longtime Disney chief: Politics.

About 70 Disney employees were in Las Vegas during Sunday night’s massacre, with many of them attending the country music concert that the murderer targeted. One Disney employee was killed and many were injured. The U.S. needs to face its problem with gun violence, he said, citing the long list of shootings.

“Where is the outrage here? This is a huge crisis for our country. We should demand a dialogue about this from our politicians,” said Iger.

The Disney chief, who plans on retiring from the company in 2019, was also asked about ESPN. The network has come under fire recently for being excessively political, say conservative sports fans.

This anger against “The Worldwide Leader in Sports” seemingly hit a fever pitch after the network declined to fire SportsCenter co-host Jemele Hill after she accused the president of being a white supremacist on Twitter. (Hill would later apologize for putting ESPN in a “difficult spot.”)
Even the White House decided to weigh in on the matter.
Iger said that he was involved in the decision about whether to discipline Hill for her comments.
“We try to remind them … that Jemele Hill is an ESPN employee and she can’t separate herself from that when she speaks publicly,” Iger said.

“We had to take context into account,” he continued, and said following Charlottesville, many people within ESPN were upset, particularly African Americans. “We have to take into account what we are seeing in society and how people are feeling,” Iger said.

Iger also said that Disney considered buying Twitter last year, but instead bought a majority stake in Major League Baseball’s video-streaming service, BAMTech.
Across the country at the Paley Center, Shari Redstone was asked if there could be a second attempt at a Viacom-CBS merger, and it made sense for the two companies to combine their content libraries. She didn’t exactly say no. “I think that in the world today, scale matters,” she said, adding that the bigger content libraries are, the more they can meet the needs of consumers.

Redstone also seemed open to partnering with a telecom company, similar to what Stephenson’s A&T is doing with Time Warner is doing in its merger with AT&T.

“I think it’s really important that we think about how we are going to work with people in telecom or people on other platforms, whether you merge or you form a strategic partnership.”