NEXT:Megyn Kelly on Roger Ailes: 'I’m Looking at a Dirty Old Man Who Wants to Get In My Pants'
PREVIOUS:How Are Megyn Kelly's Ratings Compared to Her Old Morning Show? 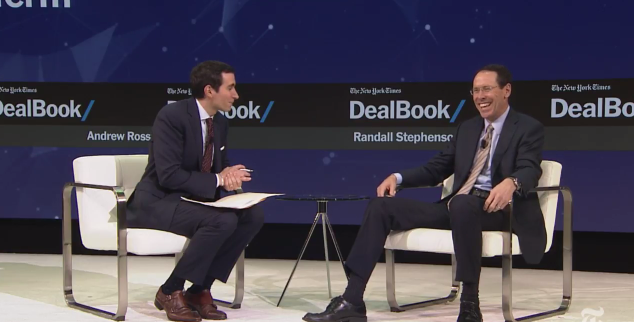 “We need to move this along. It has been a year-plus,” Stephenson told CNBC’s Andrew Ross Sorkin at today’s DealBook conference. “Either we settle or we litigate.”

Sorkin and Stephenson focused much of their conversation on the deal, which hit a snag yesterday when it was revealed that the Dept. of Justice had put conditions on the deal: sell either Turner Broadcasting, parent of CNN, or DirecTV.

But the AT&T chief continued to express frustration with the DOJ, telling Sorkin, “This is a classic vertical merger. There should not be any antitrust concerns. No competitors are being taken out of this market, and none of these types of deals has been challenged in the courts, and defeated, in over 40 years.”

Stephenson was also asked why he decided to speak out last night after the FT and New York Times reports were published. Sorkin has a byline on the Times report.

“It’s a big deal to suggest that I volunteered to sell this asset (CNN) to get the deal done,” explained Stephenson. “To have anyone thinking we are prepared to do this is harmful. I needed to set the record straight. It has been over a year and we can’t talk to anyone at Time Warner about any of this. They’re sitting on pins and needles over there.”

Stephenson also expressed anger about how the reports were leaked, saying there was “an inquisition” at AT&T last night.

Sorkin asked if Stephenson could answer critics who feel that an acquisition like this would put too much power in the hands of too few.

“Concentration of power is the least significant problem in this industry,” countered Stephenson. “There is so much fragmentation and everyone is having to re imagine their business models. We also have to re-think our models and how we redistribute content. We are trying to build a platform that can compete with Amazon, Google and Facebook.”

“You shouldn’t expect that we would sell something larger,” he said. “Selling some of the key franchises, like an HBO, makes no sense.

If this doesn’t get done by April 22nd, we would move to litigation.”

AT&T and Time Warner can walk away if the deal hasn’t closed by that date, which, coincidentally, is Stephenson’s birthday.

Sorkin then called on CNN’s Brian Stelter, which elicited laughs from the room and prompted Stephenson to say with a smirk, “call on someone else.”

Stelter proceeded to ask Stephenson if he felt any hold up was due to the president’s derision of CNN.

“I have no reason to believe that is a reason. There has been virtually no conversation with anyone in the White House about this deal. I have only dealt with the DOJ. I’m doubtful and have no reason to suspect that.”

Sorkin also asked Stephenson if he had any thoughts on his CNBC colleague David Faber‘s report that 21st Century Fox may sell off some of its assets, including the film and TV studio, to Disney.

“The deal doesn’t seem irrational to me at all,” Stephenson said. “I think people are on pause right now, seeing what happens with our deal.”