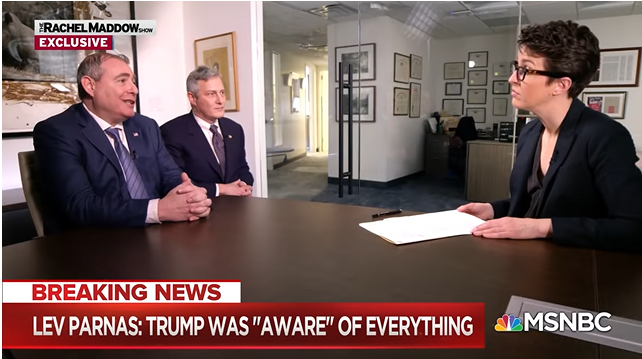 Those are record numbers for the program.

In the 9 p.m. hour, TRMS also ranked No. 1 across all of cable TV, knocking off time slot competitors Hannity and Cuomo Prime Time.

Parnas and a man named Igor Fruman are accused of helping Giuliani, the president’s personal attorney, in his attempts to investigate former vp Joe Biden and his son Hunter Biden in Ukraine. Parnas is a Ukrainian-born American citizen, and Fruman, originally from Belarus, were both arrested on campaign finance charges at Dulles International Airport this past October.

Parnas told Maddow the president was fully aware of what he and Fruman were doing in Ukraine.

“President Trump knew exactly what was going on,” said Parnas. “He was aware of all my movements. I wouldn’t do anything without the consent of Rudy Giuliani, or the President. I have no intent, I have no reason to speak to any of these officials.”

Part 2 of Maddow’s interview airs tonight in her 9 p.m. hour on MSNBC.