NEXT:Scoreboard: Thursday, Oct. 24
PREVIOUS:Jennifer Aniston on the Increase of Female Leadership in Media: 'The Voices Have Always Been There, It’s Just Now They Are Being Allowed to Use Them' 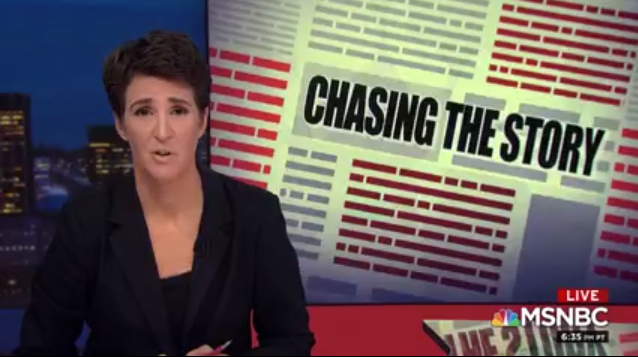 Rachel Maddow is MSNBC’s highest-rated and most recognizable personality. So, when the face of your network slams the network live and on air, you know you’ve got a big problem on your hands.

During last night’s broadcast of The Rachel Maddow Show, the host detailed alleged wrongdoing by NBC News executives, including NBC News president Noah Oppenheim, who have been accused of killing a exposé on powerhouse Hollywood producer Harvey Weinstein’s alleged sexual assaults and serving as a buffer for former Today Show anchor Matt Lauer as he faced similar claims of sexual misconduct.

Maddow recounted the reporting history of investigative journalist and former MSNBC colleague Ronan Farrow. She explained how Farrow’s reporting on Weinstein and the #MeToo movement, which ultimately earned him a Pulitzer, was started at NBC News but faced impediments and eventually was blocked from air, because of objections raised by Oppenheim and other execs.

Farrow first appeared on Maddow’s program to talk about his reporting on sexual harassment in media, and how NBC allegedly blocking his reporting, back in Oct. 2017.

He was back on the program last night.

“Now, NBC News is obviously our parent company here at MSNBC. The allegations about the behavior of Harvey Weinstein and Matt Lauer are gut-wrenching, at baseline, no matter who you are or what your connection is to this story. But accusations that people in positions of authority in this building may have been complicit in some way in shielding those guys from accountability? Those accusations are very, very hard to stomach.”

Maddow went on to note a potential pattern of network interference in seminal stories about alleged sexual harassment involving powerful men, including the infamous grab ’em by the pussy tape of Pres. Trump.

“I can tell you that inside this building, this issue, the Weinstein story, having to leave the building in order to get told and combine that with another previous gigantic story on a related subject, the Access Hollywood tape with Billy Bush, leaving this building to get told. The amount of consternation here would be almost impossible to overstate. I’ve been through a lot of ups and downs in this company since I’ve been here. It would be impossible to overstate the consternation in this building around this issue.”

Farrow tweeted out praise for Maddow.

Credit where due: @maddow, independently confirming my reporting that Weinstein story was halted by NBC execs and calling her bosses to account on their own air—not an easy thing, for her or her staff— did this. https://t.co/KW75by4oJT

Maddow also broke news that NBC is releasing former employees from any clause in their contract that would prevent them from reporting misconduct of any kind (non-disclosure agreement).

.@maddow reports: NBCUniversal offers to release “any former NBC News employee who believes that they cannot disclose their experience with sexual harassment” because of an NDA “from that perceived obligation.” pic.twitter.com/KfusAj9nVQ

“Any former NBC News employee who believes that they cannot disclose their experience with sexual harassment as a result of a confidentiality or non-disparagement provision in their separation agreement should contact NBCUniversal and we will release them from that perceived obligation,” an NBC spokesperson says in the aforementioned statement.

TVNewser has reached out to NBC for comment and we’ll update this post when we hear back.

Maddow is the second high-profile personality to criticize NBC News on its handling of its issue. Maddow’s lead-in host Chris Hayes slammed the network on-air 12 days ago for allegedly shutting down Farrow’s reporting.