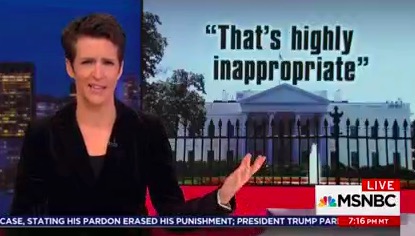 On her show tonight, MSNBC’s Rachel Maddow acknowledged getting some flak for her reporting on the ambush attack that left four U.S. troops dead in Niger earlier this month.

The Huffington post called out Maddow for reporting that troops from Chad, who had been helping in the fight against extremists, had pulled out from neighboring Niger. And that might have been to blame.

“That appears to be false,” HuffPost reports. “According to the Council on Foreign Relations and accounts from local residents, the attacks that have increased can be traced back to militant group Boko Haram, which is based just across the border in Nigeria.”

Over the course of the day today lots of people have been very upset with me for reporting that last night, which is fine. I didn’t know you cared. But the upset over my reporting doesn’t mean that anything I reported wasn’t true. Everything I reported was true. Now, this doesn’t mean that Chad withdrawing their troops was necessarily the cause of what happened to those U.S. troops who were ambushed. That ambush is being described by the Pentagon as a shock.