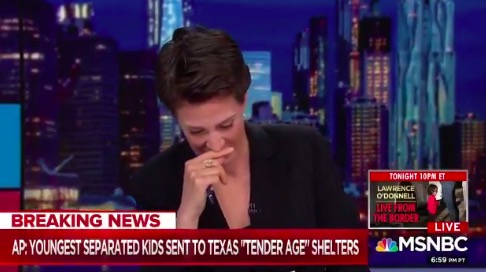 Rachel Maddow got some breaking news at the end of her show this evening that led her to break down while reading it.

Quoting an AP report, Maddow said, “This is incredible. ‘Trump Administration officials have been sending babies and other young children to at least three,'” Maddow said getting choked up, before continuing, “‘three tender age shelters.'”

She then handed off to Lawrence O’Donnell who read the breaking news and continued with coverage from South Texas.

This is Rachel Maddow upon getting the breaking news that Trump has established detention centers for babies who’ve been forcefully taken from their parents.

If nothing else, it is my job to actually be able to speak while I’m on TV.

What I was trying to do—when I suddenly couldn’t say/do anything—was read this lede: