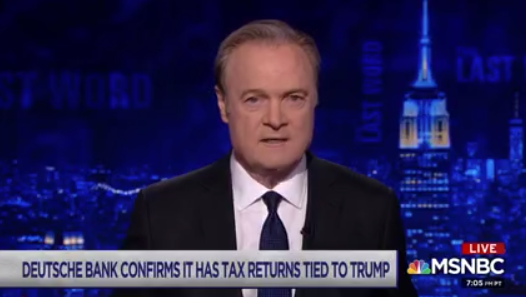 Last night I made an error in judgment by reporting an item about the president’s finances that didn’t go through our rigorous verification and standards process. I shouldn’t have reported it and I was wrong to discuss it on the air. I will address the issue on my show tonight.

President Trump’s lawyer Charles Harder is demanding an apology and retraction from NBCU over a segment Lawrence O’Donnell delivered on his 10 p.m. program yesterday.

Just in: Attorney for @realDonaldTrump sends demand for retraction, corrctn, and apology to @nbc over segment of @Lawrence program last nite in which he said “Russian oligarchs” co-signed Deutsche Bank loans to Trump. Letter says that statement is “false and defamatory.” Letter: pic.twitter.com/HY0ZRAES5i

As mentioned above, the MSNBC host stated last night on-air that Russian oligarchs co-signed a loan provided to the president by Deutsche Bank.

One issue. OK, multiple issues: O’Donnell only had one source for this report. O’Donnell also conceded that the single source had not even seen the bank records, before adding “this has not been confirmed by NBC News.”

O’Donnell added: “I have not seen any documentation from Deutsche Bank that supports this and verifies this. This is just a single source who has revealed that to me and that’s where that stands at this point. It’s going to need a lot more verification before that can be a confirm-able fact.”

So, then why even report it at all? If a host –aided by his producers– is going to deliver what seems like a pretty significant report, he or she better have multiple sources.

I understand why reporters often rely on anonymous sources, and so long as they have multiple sources with direct knowledge/evidence of an event, its fair game IMO.

But single sourcing “scoops” with no evidence/direct knowledge is indefensible & should be rejected by everyone. https://t.co/qBjrso3072

Deutsche Bank is declining to comment on Lawrence O’Donnell’s reporting that Russian oligarch’s co-signed Trump’s loans. The information came from a single source who has not seen the bank records. NBC has not seen those records and has not yet been able to verify the reporting.