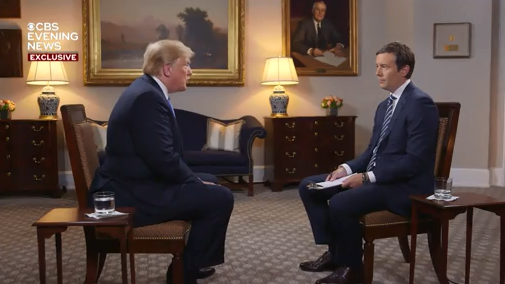 Jeff Glor interviewed President Trump at his golf course in Scotland this past Saturday before the summit in Helsinki with President Putin. The two met up again Wednesday afternoon at the White House, with the political atmosphere significantly different from their last meeting. TV newsers of all stripes have been criticizing the president since Monday when he appeared to side with the Russian president over his own intelligence agencies when it came to the topic of Russian meddling in the 2016 U.S. presidential election.

During his sit-down with Glor, President Trump attempted to walk back the sentiment he expressed Monday in Helsinki and told the CBS Evening News anchor that he now holds Putin “personally responsible” for the meddling:

GLOR: You say you agree with U.S. intelligence that Russia meddled in the election in 2016.

TRUMP: Yeah and I’ve said that before, Jeff. I have said that numerous times before, and I would say that is true, yeah.

GLOR: But you haven’t condemned Putin, specifically. Do you hold him personally responsible?

TRUMP: Well, I would, because he’s in charge of the country. Just like I consider myself to be responsible for things that happen in this country. So certainly as the leader of a country you would have to hold him responsible, yes.

GLOR: What did you say to him?

Glor also asked Trump about all of the criticism he has been receiving about his performance in Helsinki, including from his supporters like Sen. Lindsey Graham and Newt Gingrich. He claimed to be confused by all of the criticism, saying “I don’t know what all of the fuss is about, I think we did extremely well.”

Trump later turned to his favorite foil, the press, calling it “fake news” in how it covered his private, 2.5 hour meeting with Putin (the conversation was behind closed doors so the press couldn’t cover it anyway). Here’s some of the back and forth between Trump and Glor:

GLOR: Newt Gingrich said it was the most serious mistake in your presidency.

GLOR: Who gives you the best advice? When you come back and– you read all these stories, you said, you know, what the fuss is all about. Who do you talk to?

TRUMP: Well, I– I will tell you, I– I don’t know what the fuss is all about. I think we did extremely well. And– I think– the press makes up the f– look, it’s fake news. And people understand. I think the press largely makes up a lot of the fuss about a lot of things. And I’m not talking about one of it, I’m talking about everything.

TRUMP:  It’s crazy. You do something that’s positive, and they try and make it as negative as possible. Not all. And I have to say this, some of the most honorable people I know, some great people, are reporters, journalists, et cetera. But the level of dishonesty in your profession is extremely high.

GLOR: But the press covered the substance and the wording of that press conference accurately.

TRUMP: I don’t care what they covered. They don’t– they didn’t cover my meeting. The important thing, frankly, was the meeting that lasted for two and a half hours, or almost two and a half hours. And in that meeting, we discussed many, many things that were very, very positive for both countries.

Additional portions of the interview air Thursday on CBS This Morning and Thursday evening on the CBS Evening News.