NEXT:TV News Breaks In to Cover Death of Anthony Bourdain: 'It's Very, Very Hard for Us This Morning'
PREVIOUS:Charles Krauthammer Reveals He Has Only 'a Few Weeks' to Live 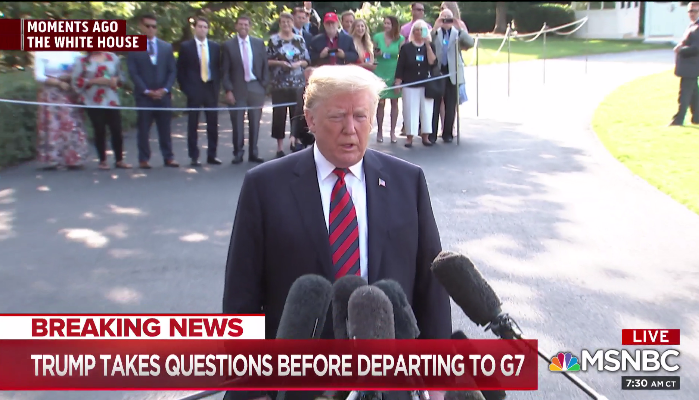 President Trump seemed to surprise the gaggle of reporters outside the White House this morning by making himself available to answer questions for roughly 17 minutes before his flight to Canada for the G-7 Summit. During one of his answers he said that he is “a big believer in freedom of the press.”

The comment was part of his response to a question concerning last night’s news that James Wolfe, a veteran Senate Intelligence Committee staffer, had been arrested the night before on charges of lying to FBI agents during an investigation into the leak of classified information in which the feds seized emails and phone records belonging to New York Times reporter Ali Watkins.

“Are you glad they caught the leaker?” asked the reporter.

Trump called himself “Russia’s worst nightmare,” but then said Russia should be at the summit after noting they used to be part of the global gathering.

“It used to be the G8 because Russia was in it,” Trump told the group of reporters. “Now, Russia is not in it. Now, I love our country. I have been Russia’s worst nightmare. If Hillary got in, I think Putin is probably going, man, I wish Hillary won because you see what I do. But, with that being said, Russia should be in this meeting. Why are we having a meeting without Russia being in the meeting? And I would recommend and it’s up to them, but Russia should be in the meeting and should be a part of it.”

“You know, whether you like it or not, and it may not be politically correct, but we have a world to run,” Trump said. “And in the G-7, which used to be the G8, they threw Russia out. They should let Russia come back in because we should have Russia at the negotiating table.”

When asked why he wasn’t preparing for the upcoming summit with North Korea in Singapore, he took another shot at Clinton and said, “ask Hillary what happens when you take a week to prepare for a debate…I’ve been preparing all my life, but the fake news doesn’t report that.”

He then called out and pointed at NBC News national correspondent Peter Alexander. “If you run, Peter, a little bit longer the clip, you’d really see that I’ve been preparing all my life…I said that, but of course the news doesn’t pick that up because it’s fake news.”

He also added he has an “absolute power” to pardon himself, but has no reason to; said he is considering pardoning Muhammad Ali (even though SCOTUS overturned the conviction in 1971); called James Comey a “very dishonest man” and said the report coming out next week on his birthday is a “birthday present.” (His actual birthday is next Thursday, June 14), and then added that he “hates” that children are separated from parents at immigrant detention centers, but decided to blame it on the Democrats.