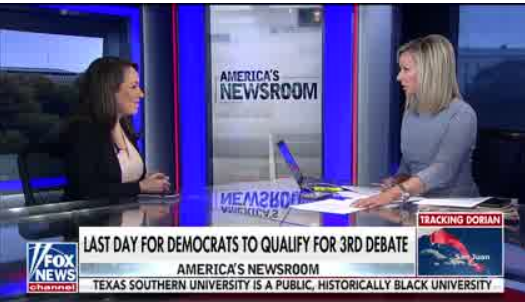 President Trump sharply criticized Fox News this morning in a trio of tweets.

In one, he refers to the network as “HOPELESS & CLUELESS.” This particular tweet was posted minutes after America’s Newsroom anchor Sandra Smith interviewed DNC comms director Xochitl Hinojosa.

Just watched @FoxNews heavily promoting the Democrats through their DNC Communications Director, spewing out whatever she wanted with zero pushback by anchor, @SandraSmithFox. Terrible considering that Fox couldn’t even land a debate, the Dems give them NOTHING! @CNN & @MSNBC….

….are all in for the Open Border Socialists (or beyond). Fox hires “give Hillary the questions” @donnabrazile, Juan Williams and low ratings Shep Smith. HOPELESS & CLUELESS! They should go all the way LEFT and I will still find a way to Win – That’s what I do, Win. Too Bad!….

….I don’t want to Win for myself, I only want to Win for the people. The New @FoxNews is letting millions of GREAT people down! We have to start looking for a new News Outlet. Fox isn’t working for us anymore!

Fox News isn’t supposed to work for you. https://t.co/kQDY4UKv8z

We don’t work for you. https://t.co/xqcmJJPOqc

Fox News has remained silent today about President Trump’s criticisms of the network.

This is also not the first time the president has expressed anger when Fox News personalities feature Democrats on their respective shows. Trump frequently targets FNC contributor Donna Brazile, a Democrat, and The Five panelist Juan Williams, also a Democrat. He has also been known to go after the network’s news anchors, Chris Wallace and Shepard Smith, two of the network’s top news personalities. Trump likes to call out Smith, in particular, for “low ratings.”

There was also a July 7 tirade about the mainstream media, including Fox News weekend anchors.

….their lowest rated show. Watch the @FoxNews weekend daytime anchors, who are terrible, go after her big time. That’s what they want – but it sure is not what the audience wants!

The “it sure is not what the audience wants!” line from July resembles his tweet from this morning.

Then, there was this occurrence in March 2019:

I’m working with @ArthelNeville and @LelandVittert this weekend…like most weekends. They’re both incredible journalists, constantly engaged and inquisitive. I’m proud to call them colleagues…as I am proud to work with @ShepNewsTeam each week. https://t.co/fU7zOhRXlY

This tweet was posted at around the same time The Washington Post’s Sarah Ellison and Paul Farhi reported that the president might be “changing his tune”on Fox News.