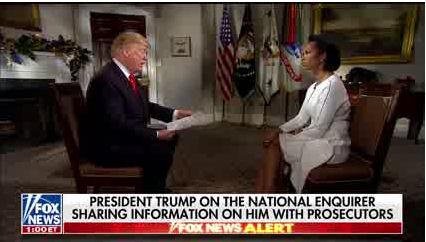 President Trump is sitting down with Fox News anchor Harris Faulkner today in Texas for his first interview since the murder of George Floyd, an event that has spawned protests against police brutality all over the world.

The interview, which will tape at 5 p.m. ET and air shortly thereafter, will be Faulkner’s second one-on-one with the president. The first one took place in December 2018 in the White House. Faulkner’s colleagues praised her performance in that 2018 interview, but her questioning was criticized by some TV newsers at other networks.

It remains to be seen how Trump will respond to Faulkner’s questioning this time around, where the stakes are even higher.

Faulkner, who is Black, recently provided her thoughts to People on what has transpired in recent weeks, saying, “For those people who are legitimately hurting—I live in this skin so I know how it feels. I’ve been pulled over while driving. I know how that feels … I had that moment of brain freeze and ‘What do I do? I don’t want to make a mistake.'”

She added: “It hurts us in just a deep, deep way … for all Americans. I think that we are hyperventilating and missing an opportunity for unity because we can agree on that videotape. I haven’t met anybody who doesn’t see that that was killing on-camera.”