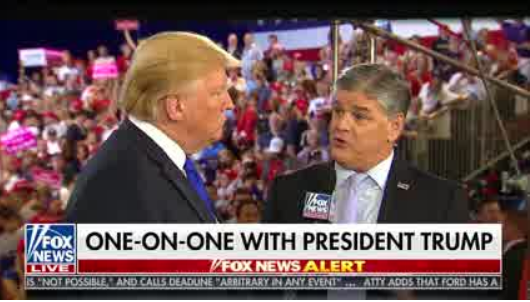 It was announced last Friday that Trump would sit down for an interview with Hannity on Monday, but the statement above reads like Hannity and Limbaugh will be participating in the rally.

Fox News seems to be downplaying the nature of Hannity’s presence at Monday’s event, saying “he will just be hosting his 9 p.m. show from the rally site where he will be interviewing Trump.”

As per the photo above, Hannity—who hosts the No.1  show on cable news—has interviewed Trump from the site of his rallies on previous occasions; but he has not actively participated in any Trump rally while Trump has been president.

It will be interesting to see if that’s the case once again on Monday evening, or if this “guest appearance” includes the cable news legend being a far more active participant.

In spite of reports, I will be doing a live show from Cape Girardeau and interviewing President Trump before the rally. To be clear, I will not be on stage campaigning with the President. I am covering final rally for my show. Something I have done in every election in the past.