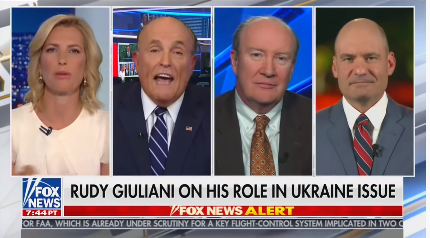 President Trump’s personal lawyer, Rudy Giuliani, claimed Tuesday on Laura Ingraham‘s 10 p.m. Fox News program that he had been dealing with Ukrainian officials regarding U.S.-Ukranian relations at the request of the US State Department.

“I never talked to an Ukrainian official until the State Department called me and asked me to do it,” he told Ingraham. “And then I reported to every conversation back to them.”

Ingraham’s news-making interview with Giuliani took place after The Washington Post published an article citing current and former US officials as saying Giuliani had dealt with Ukrainian officials on behalf of the president, not the State Dept. National security officials, who traditionally handle these types of matters, were reportedly surprised and were reading media reports to find out what Giuliani was doing.

Ingraham had former aide to Senator Schumer, Chris Hahn on her show later in the hour, and he said, stunned, “I just heard the president’s personal, political attorney say that he was directed by the State Department to go meet with the Ukraine to get evidence on the president’s political opponent,” before adding, ““If the Bidens weren’t public figures, it would be libelous!”

Ingraham then brought Giuliani back onto the program, with Hahn, who disagreed with the former New York City mayor about the whistleblower complaint filed against the President regarding a conversation he had in July with the Ukranian president.

A screaming match then ensued.

“Mr. Hahn, I should sue you for libel because you irresponsibly said – actually, you usually say incredibly stupid things…” proclaimed Giuliani.

“No you don’t, you just lied!” Giuliani said.

They kept arguing and the president’s lawyer said, “Why don’t you tell him to keep his mouth shut so we could tell the truth! Just keep your lying mouth shut! He said about me that I was asked by the State Department to go dig up political dirt on Trump’s opponent. Totally false. The State Department asked me…”

“No, I didn’t, you did, you liar!” Giuliani shot back. “You did! Turn him out so I can speak. I do not want to be interrupted by that serial liar.”

An intense back and forth isn’t necessarily abnormal for cable news. Calling some an “idiot” or “moron” and telling them to shut up is.