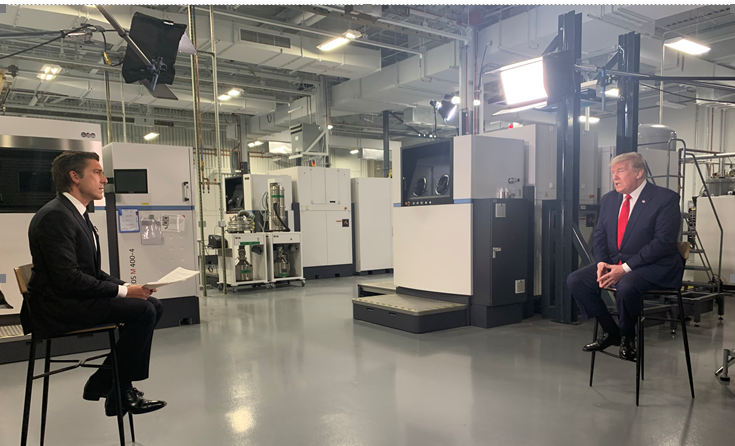 President Trump has decided to expand his horizons, at least temporarily, and granted an interview to ABC News and the most-watched personality on television: David Muir.

Will be doing a major interview tonight at 6:30 P.M. Eastern with @DavidMuir on @ABCWorldNews Tonight.

The Trump-Muir interview took place in Phoenix this afternoon, and wrapped not long ago. About an hour before air, ABC News disclosed that Muir asked the president about reopening parts of the country, on the possibility of 19% unemployment, whether or not the election should be a referendum on his handling of the pandemic and more.

As we reported earlier today, not only has World News Tonight been the most-watched evening newscast for the past 75 weeks, but it has also been the most-watched show on U.S. television for the past three weeks. If the president wants to defend his response to the coronavirus pandemic, and reach the widest audience on television right now, this is the program on which to do it.

President Trump has almost exclusively stuck with Fox News when it comes to interviews and town halls. In fact, the last time he sat down for an interview with a broadcast newser was with then-CBS Evening News anchor Jeff Glor in July 2018. Now a CBS This Morning: Saturday co-host, Glor interviewed Trump at his golf club in Scotland ahead of the summit in Finland with Russian President Vladimir Putin, and he received a follow-up with the president after the summit.

This is not the first time Trump has sat down with Muir. In fact, he gave his first interview as president to Muir. The two sat down on Wednesday, Jan. 25, 2017.

That interview aired in ABC’s 10 p.m. hour, and delivered 7.5 million total viewers, making it the most-watched program on television that night. World News Tonight, on the other hand, has been delivering north of 10 million viewers.

In an April 2017 conversation with WCVB-TV news anchor Maria Stephanos in front of a crowd gathered by the Greater Boston Chamber of Commerce, Muir recalled that entire experience with Trump as “awkward.” For one, instead of sharing a White House walk together and then having a sit-down interview, he changed the schedule at the last minute.

“I knew I was not walking in there to have a comfortable moment with President Trump, and that wasn’t his expectation either,” he added.

Muir said the interview was tense, including when the subject of Trump’s unfounded voter fraud claims arose. But he felt it was necessary to ask questions he thought viewers at home would want answers to.

“I walked in with a profound respect for the White House … but even more for the people at home,” Muir said.

Once the interview ended, Muir was indeed granted the promised walk and talk with Trump on the White House grounds. And when they entered the Oval Office, a letter from former President Obama to President Trump was atop the desk, per tradition. Muir said the letter appeared to be about five paragraphs in length, but he wasn’t able to make out any of the words.