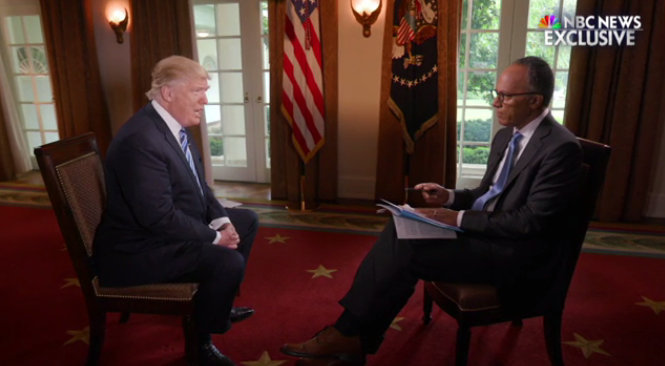 President Trump likes to attack the news media and specific networks when he feels he’s not being covered fairly. But he doesn’t always go after specific TV news personalities. This morning, he did.

He started with one of his favorite targets: NBC Newser-turned CNN Worldwide president Jeff Zucker, whom he refers to him as “Little Jeff Z.”

The hatred and extreme bias of me by @CNN has clouded their thinking and made them unable to function. But actually, as I have always said, this has been going on for a long time. Little Jeff Z has done a terrible job, his ratings suck, & AT&T should fire him to save credibility!

What’s going on at @CNN is happening, to different degrees, at other networks – with @NBCNews being the worst. The good news is that Andy Lack(y) is about to be fired(?) for incompetence, and much worse. When Lester Holt got caught fudging my tape on Russia, they were hurt badly!

Trump’s false claim that Holt “got caught fudging my tape on Russia” is in reference to the notorious May 2017 interview where the president admitted to Holt on-camera that he fired former FBI director James Comey due to the Russia investigation.

There doesn’t seem to be any proof of any “fudging” happening. In fact, the entire 13+ minute unedited interview has been online since May 11, 2017:

Then, there’s the attack on Andy Lack, which is probably in reference to Emily Smith‘s story for Page Six published earlier this week, where she claims Lack will be fired “over his mishandling of a series of #MeToo scandals and the Megyn Kelly debacle.”

Trump then shifted to a general criticism of the media:

I just cannot state strongly enough how totally dishonest much of the Media is. Truth doesn’t matter to them, they only have their hatred & agenda. This includes fake books, which come out about me all the time, always anonymous sources, and are pure fiction. Enemy of the People!

Just another day in Trump World.