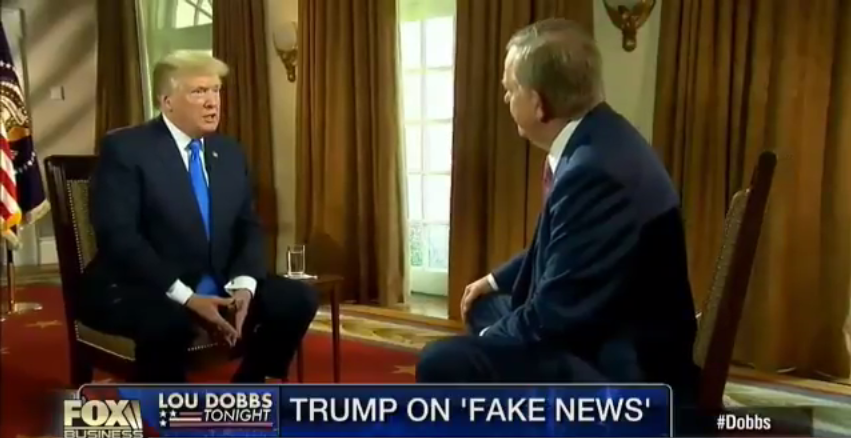 During a wide ranging sit down conversation with Fox Business host Lou Dobbs, Pres. Trump targeted his favorite adversary, the news media, but went on to praise Dobbs’s program, “I watch it absolutely all the time, even if it means Tivo.” He also asked Dobbs who he personally would choose for the Fed chair.

Dobbs, who currently hosts the most-watched business news show for 2017, began the interview by praising the president: “In nine months in office you have already accomplished more in the way of job creation…” He later told the president, “you’re one of the most — I would say, by the left particularly, reviled, even hated men to ever hold your post.” He continued, “And you are one of the most loved and respected men to ever hold your post in history.”

During the interview, Trump would criticize the North American Free Trade Agreement (NAFTA) and the WTO, and touted GOP unity when it came to a tax reform package.

Then it got interesting.

Pres. Trump on the Fed chair:

Trump: I have it down to two or three people. I think over the next very short period of time. I’ll be announcing it. It won’t be a big shock. You have been talking about the various people that it watch absolutely all the time even if it’s Tivo.

Dobbs: We appreciate it.

Trump: Your show is fantastic. We will be announcing in a short period of time. Do you have a preference, out of curiosity?

Dobbs: May I constrain myself? As an ad hoc adviser to the president…

Dobbs: I personally believe Janet Yellen might be worth keeping.

Trump: She was in my office a few days ago. She is very impressive. I like her a lot. I would certainly think about it. I would like to say you would like to make your own mark which is maybe one of the things she has a little bit against her. But I think she is terrific. We had a great talk, and we are obviously doing very well together, looking at the markets.

Then the president’s rant about TV news:

Trump: The one thing I really thought — I thought it was treated unfairly by the press during the campaign. I thought the good news is now they will start treating me well. But they got much worse. They put on stories on CNN and NBC and CBS and ABC, and MSNBC, which is just ridiculous. They put on stories that are so false, they have so-called sources that in my opinion don’t exist. They will say sources have said. They make it up. It is so dishonest and so fake.

And you know I have come up with some pretty good names. One of the best names, they turned it around and now they are calling stories put out by Facebook fake and they are fake. What could be more fake than CBS and NBC and ABC and CNN when you look at some of these stories and look at the amount of negative. I know a good story from the bad story. But when you have a good story and they make it bad. I’ll say to my wife, “tonight I’m going to enjoy watching television because i did great,” then they put it on and it’s like “oh, that’s not so good.” They are fake news.

The good thing about social media is I have so many millions of people, 128 million if you add up all the different platforms. Massive social media. At least I can put out — it’s not that it want to do it. I would love to not do it at all. But at least I can put out the truth and put out the real word. And people agree. If you look at the level much approval of general media, if you look at it from the day I started running until now, I’m so proud I have been able to convince people how fake it is, because it has taken a nosedive. Except for your show and Sean [Hannity] and a few of them. Now Fox has treated me fairly, and I don’t mean good, but they have treated me fairly. I just want to be treated fairly.