The president is tweeting again this morning, and rather than take on the “fake media” in general he got very specific and very personal about MSNBC’s morning hosts, with whom he used to be quite chummy.

…to Mar-a-Lago 3 nights in a row around New Year's Eve, and insisted on joining me. She was bleeding badly from a face-lift. I said no!

“It’s a sad day for America when the president spends his time bullying, lying and spewing petty personal attacks instead of doing his job,” an MSNBC spokesperson said in response to Trump’s tweets.

And at least one Republican Senator agrees:

Please just stop. This isn't normal and it's beneath the dignity of your office.

And here’s Mika’s response, in one image:

This reminds me: how is @FLOTUS's campaign against cyber-bullying going? https://t.co/X4xmyreGLH

George Washington wrote John Adams in 1789 that a President of the United States must "maintain the dignity of Office." 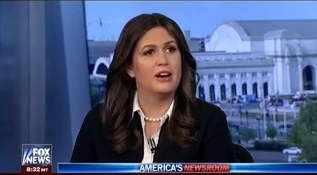 Deputy Press Secretary Sarah Huckabee Sanders was asked about the president’s tweets at the end of an interview with Bill Hemmer on Fox news in the 10:30 half hour:

Hemmer: This was a suggestion about some folks at MSNBC on a morning program there. What is the White House saying about why that went out?

Huckabee Sanders: I don’t think that the president’s ever been someone who gets attacked and doesn’t push back. There have been an outrageous number of personal attacks, not just to him but to frankly everyone around him. This is a president who fights fire with fire and certainly will not be allowed to be bullied by liberal media or liberal elites in Hollywood or anywhere else.

Hemmer: I get it. But is that necessary?

Huckabee Sanders: I think what’s necessary is to push back against unnecessary attacks on the president. I’ve seen far worse things come out of that show.

Huckabee Sanders: I think I have addressed that as much as I can in terms of the president, again, isn’t going to be somebody who is bullied.

Hemmer: You would argue he is always going to punch back and not fire the first shot and he feels the criticism toward him is unwarranted.

Huckabee Sanders: The outrageous attacks that take place on that show day in, day out, not just at the president, and not against his policies, not against things that he is pushing but they are personal and not just directed at him. I have been called a lot of names on that show that don’t have anything to do with my beliefs or ideology or policy but they are personal attacks.

Hemmer: Is there something we need to know more about this relationship?

Huckabee Sanders: Not that I’m aware of. I couldn’t speak to anything.

Speaker of the House Paul Ryan reacted at his weekly news conference around 11:45 a.m.:

Ryan on Trump tweets: "We're trying to improve the tone & civility of the debate & this obviously doesn't do that." https://t.co/2rZ7oOmZqg

They are the toughest of competitors, but CNN says it stands with Joe and Mika:

We stand with @MSNBC’s @MorningMika and @JoeNBC. ?