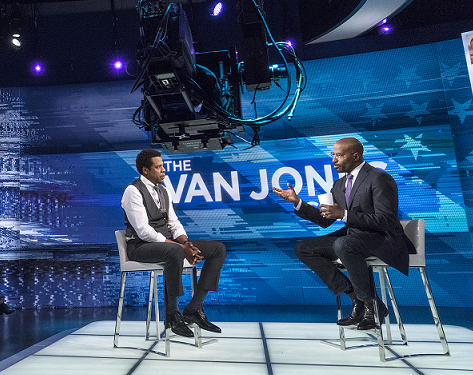 This time, it’s a hip-hop icon President Trump is going after.

Trump took to Twitter this morning to criticize comments Shawn Carter (“Jay-Z”) made on the CNN series premiere of The Van Jones Show, and to once again tout his own policies as the reason why unemployment among African Americans is presently at an all-time low (it’s true that it’s at an all time low, though it has been in decline for years now).

Somebody please inform Jay-Z that because of my policies, Black Unemployment has just been reported to be at the LOWEST RATE EVER RECORDED!

During the program, Jones brought up Trump  being quoted earlier this month as saying, “Why are we having all these people from shithole countries come here?” referring to immigrants from countries like Haiti and El Salvador and from Africa.

After Jones asked Carter how, as a dad, he sees those comments, (Carter described them as “hurtful“), he then asked if Trump is in fact a good leader from an economic standpoint.

Jones:  To give him [President Trump] a little bit of credit too, he is somebody who is now saying, look, I’m growing—I’m dropping black unemployment.  Black people are doing well under my administration.

Does he have a point that maybe the Democrats have been giving us good lip service, but no jobs.  He may say terrible things, but putting money in our pockets.  Does that make him a good leader?

CARTER:  No, because it’s not about money at the end of the day.  Money doesn’t equate to happiness. It doesn’t.  That’s missing the whole point.  You treat people like human beings, then that’s the main point.

You can’t treat someone like—it goes back to the whole thing, you going to treat me really bad and pay me well. It’s not going to lead to happiness. It’s going to lead to, again, the same thing.

Everyone is going to be sick. The point about that, yes, on a Democrat side is, yes, it’s been a lot—that’s what opened the door for this sort of presidency, right?

For many years, guys—Middle America, they have been voting Democrat because that’s what they were—their family did. They did it as a replay.  It’s like—yes, yes. And their needs weren’t addressed.

It was more so, “OK, let’s get this vote because this vote”—it became about votes, not people. That’s my problem with government: I think they forget that it’s real people behind these decisions they are making.

They’re not—we are not 25,000 votes in this area. It’s people going through real things in real time and real pain. When you ignore those—that pain for so long, people act out. It’s like now “I want to see something different, I don’t know.” That opens the door for what we are living through now.

Someone needs to inform @realdonaldtrump that I ALREADY asked Jay Z whether black employment figures redeem Trump’s presidency. And Jay’s answer last night on the #VanJonesShow was POWERFUL !!! … Watch the VIDEO for yourself: https://t.co/7Sv3rHKkmW https://t.co/jbHpkKOM5o