NEXT:Megyn Kelly is Easing Into Her New Role at NBC News
PREVIOUS:Carl Cameron is Retiring From Fox News 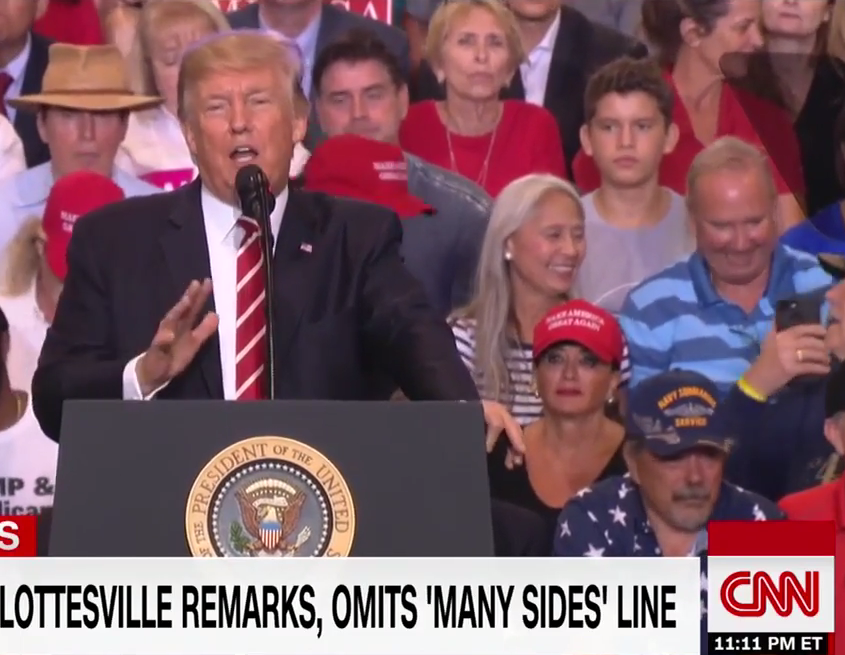 President Donald Trump held a rally in Phoenix Tuesday night, one where he was supposed to expound on his administration’s immigration plans. The speech ended up being overshadowed by a 20-minute verbal attack on the news media for what he perceived as “unfair” coverage of his remarks concerning the White nationalist and neo-Nazi protests in Charlottesville, Va.

Trump’s assault on the media kicked into high gear about 15 minutes in:

“If you’re reading a story about somebody, you assume it’s honest because it’s like the failing New York Times, which is like so bad. Or The Washington Post, which I call a lobbying tool for Amazon. Or CNN, which is so bad and so pathetic and their ratings are going down, right?”

Then the president decided to insult ABC News anchor George Stephanopoulos for his remarks during an interview with U.N. ambassador Nikki Haley on Good Morning America.

“ABC this morning, I don’t watch it much but I’m watching in the morning and they have little George Stephanopoulos talking to Nikki Haley, right? Little George. He talks about the speech I made last night which believe it or not got great review, right? They had a hard time. They were having a hard time because it was with soldiers. We were somber. We were truthful. We were saying things, and it really did. So, he talked about it for like that much. Then he goes: ‘Let’s get back to Charlottesville.’

“It’s time to expose the crooked media deceptions,” Trump told the crowd at one point, adding that the media was “trying to take away our history and our heritage,” and that journalists were “sick people who don’t like our country.”

President Trump claimed that The New York Times gave him an apology after the election (which is reportedly false), and said “CNN does not want its falling viewership to watch what I’m saying tonight” (even though CNN broadcasted the comments live, and was a top 10 network in prime time last month).

MSNBC’s Lawrence O’Donnell broke in at various points throughout Trump’s rant to correct things he said to the crowd. “This is the president lying about the media,” O’Donnell remarked at one point.

Trump did praise his news outlet du jour Fox News during the speech.

“I must tell you, Fox has treated me fairly … Hannity, how good is Hannity? And he’s a great guy. He’s an honest guy.” He then went on to compliment Fox & Friends, saying its “a great show, the most honest show.”

Many cable newsers were neither impressed nor amused by the speech. Here’s what CNN Tonight host Don Lemon had to say right after its conclusion:

“Well, what do you say to that? I’m just going to speak from the heart here. What we witnessed is a total eclipse of the facts. Someone who came out on stage and lied directly the American people and left things out that he said in an attempt to rewrite history, especially when it comes to Charlottesville. He’s unhinged, it’s embarrassing and I don’t mean for us, the media because he went after us, but for the country. This is who we elected as our President of the United States, a man who is so petty that he has to go after people he deems to be his enemy, like an imaginary friend of a 6-year-old. His speech was without thought, without reason, devoid of facts, devoid of wisdom. There was no grey area. He was like a child blaming a sibling on something else. ‘He did it, I didn’t do it.’ He certainly opened up the race wound from Charlottesville. This is a man clearly wounded by the rational people abandoning him in droves, meaning the business people and the people in Washington now questioning his fitness for office and whether he is stable. This is a man backed into a corner it seems by circumstances beyond his control and his understanding. That’s the truth. If you watch that speech as an American, you had to be thinking: ‘What in the world is going on?’ This is the person we elected as President of the United States? This petty, this small person who who’s supposed to pull the country together? Certainly didn’t happen there…”