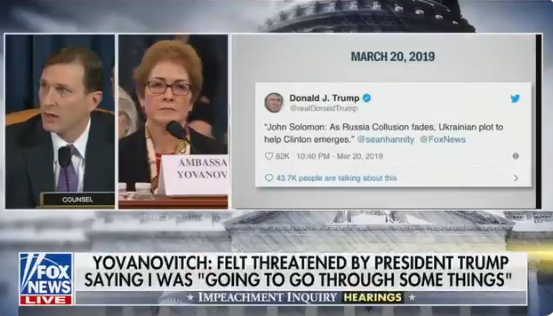 With day one in the books, we’re onto the second House Intelligence Committee open impeachment hearing, as Democrats continue to investigate whether Pres. Trump betrayed his oath of office and placed his personal interests above national security through his back-and-forth with Ukrainian president Volodymyr Zelensky.

Former U.S. ambassador to Ukraine Marie Yovanovitch is testifying today before the committee. Yovanovitch was recalled from her post in Ukraine earlier in 2019 following a campaign to discredit her led by Pres. Trump’s personal lawyer Rudy Giuliani.

Yovanovitch’s first-ever assignment as a U.S. diplomat was in Somalia in 1986 as a 28-year old, and she was named to her first ambassadorship under Republican Pres. George W. Bush. She served under Pres. Obama as the ambassador to Ukraine, but was let go by the Trump administration in 2016.

The most significant moment of the hearing so far ironically came courtesy of a Pres. Trump tweet. In it, he insults her 33-year career as a diplomat and goes on to state that he has “absolute right to appoint ambassadors.”

Everywhere Marie Yovanovitch went turned bad. She started off in Somalia, how did that go? Then fast forward to Ukraine, where the new Ukrainian President spoke unfavorably about her in my second phone call with him. It is a U.S. President’s absolute right to appoint ambassadors.

….They call it “serving at the pleasure of the President.” The U.S. now has a very strong and powerful foreign policy, much different than proceeding administrations. It is called, quite simply, America First! With all of that, however, I have done FAR more for Ukraine than O.

House intelligence committee chairman Adam Schiff then asked the witness to respond to Pres. Trump’s tweet in real-time: “Ambassador Yovanovitch, as we sit here testifying, the president is attacking you on Twitter, and I’d like to give you the chance to respond. I’ll read part of one of his tweets: ‘Everywhere Marie Yovanovitch went turned bad. She started off in Somalia, how did that go?’”

After Schiff asked the former ambassador what Pres. Trump’s remarks might have on other witnesses being willing to come forward and expose wrongdoing.”

Yovanovitch replied: “Well, it’s very intimidating,” before adding, “I mean I can’t speak to what the president is trying to do but I think the effect is to be intimidating.”

“I want to let you know ambassador that some of us here take witness intimidation very, very seriously.”pic.twitter.com/umqZb6Snrj

People who wanted “pizazz” from these hearings most certainly received it at this juncture.

That was a turning point in this hearing so far. She was already a sympathetic witness & the President’s tweet ripping her allowed Schiff to point it out real time characterizing it as witness tampering or intimidation -adding an article of impeachment real-time. https://t.co/HSCkGMIqmH

Chris Wallace just said this to Fox News viewers: “If you are not moved by the testimony of Ambassador Yovanovitch, you don’t have a pulse.”

CBS News congressional reporter Nancy Cordes during the break: “I don’t think I’ve ever seen anything quite like this at a hearing in my 11 years of covering Capitol Hill. A U.S. Ambassador with an unblemished record over decades, basically describing how she was taken down by forces here in the U.S., apparently with the backing of the President of the United States.”

.@nancycordes on Yovanovitch’s testimony about her removal: “I don’t think I’ve ever seen anything quite like this at a hearing in my 11 years of covering Capitol Hill” https://t.co/qNx16IztcL pic.twitter.com/rtlkUJWZ4U

GOP leadership “knew Amb. Yovanovitch would come across as a credible witness, as someone who had served the country and had lots of dangerous posts and had always worked consistently with U.S. policy,” source told @MajorCBS https://t.co/bSQiV287X2 pic.twitter.com/L57VfyxC9S

.@jonkarl: “For the president in the midst of this testimony to attack [Yovanovitch] personally and suggest that she was somehow responsible for what went down in Somalia is one of the most extraordinary moments I have seen covering this White House.” https://t.co/APRDkqce3Q pic.twitter.com/6PkrtaKr18

ABC News chief anchor George Stephanopoulos added:”Soft voice testimony from a career diplomat that was also steely and at times, stirring, talking about her anti-corruption efforts in the Ukraine, talking about her reaction when she heard that President Trump was speaking with the president of Ukraine on the phone calling her bad news and saying she was going to go through some things, and also laying out in some detail, how she believed that the campaign against her by Rudy Giuliani and others close to the president, including the president, was based on fabrications and lies. Statements corroborated by the state department. Perhaps most extraordinary in the course of this hearing, even though the White House has said the president wouldn’t be watching, the president by tweet attacked Ambassador Yovanovitch.”