NEXT:Chris Wallace Asks Putin Why So Many of His Political Rivals End Up Dead
PREVIOUS:Evening News Ratings: Week of July 9 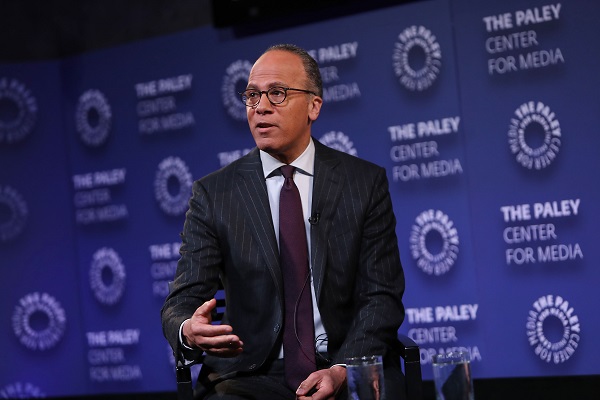 The non-profit Poynter Institute for Media Studies is awarding its 2018 Poynter Medal for Lifetime Achievement in Journalism to Lester Holt, anchor of NBC Nightly News and Dateline NBC. The veteran newsman will receive the award at Poynter’s annual Bowtie Ball in St. Petersburg, Fla., on Dec. 8.

“Lester Holt’s distinguished journalism career is one covering communities with depth, grace and integrity. He worked as a local journalist in some of America’s most vibrant markets, and his excellence and work ethic have led him to be the anchor of one of America’s most watched and influential newscasts,” Poynter president Neil Brown said in a statement. “Whether it’s reporting from global hot spots, moderating presidential debates or conducting news-making presidential interviews, Lester Holt stands tall as a journalist who continues to make a mark. We are pleased to honor him with the Poynter Medal of Lifetime Achievement and look forward to a great celebration of journalism here in December.”

Holt’s work has been recognized many times over the past couple of years, including multiple Emmys and Quinnipiac University’s Fred Friendly First Amendment Award in 2017, and the Los Angeles Press Club’s Joseph M. Quinn Award for Lifetime Achievement in June 2018. Additionally, in 2016, he was featured on Time’s 100 Most Influential People list and was named Journalist of the Year by the National Association of Black Journalists.

He was selected to moderate the first presidential debate of 2016, which was the most-watched debate in American history, and his interview with President Trump last May stands as the most consequential important of the Trump presidency after Trump told Holt the firing of former FBI head James Comey was tied to the Russia investigation.

Holt joined NBC News in 2000, reporting and anchoring both locally and around the world. He’s covered everything from terrorist attacks in Manchester, Brussels and Paris to natural disasters in Japan and Haiti. He’s reported on the Iraq and Afghanistan wars, led coverage of presidential elections and much more.

The Poynter Medal recognizes the career achievements of a journalist “whose work has made a lasting impact serving citizens in our democracy.” Previous recipients of the Poynter Medal for Lifetime Achievement are PBS NewsHour anchor Judy Woodruff (who was recently honored at the Gracie Awards) and former Face the Nation moderator Bob Schieffer.