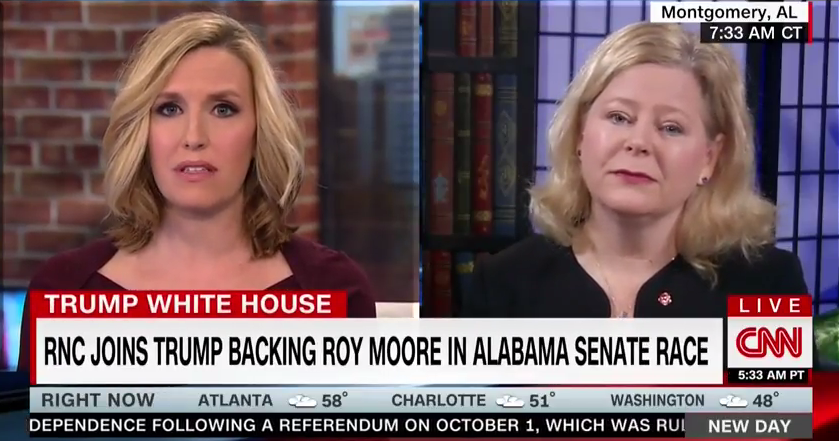 Alabama U.S. Senate Republican candidate Roy Moore is one of the most polarizing figures to run for public office. Apparently he employs firebrand spokespeople as well.

As Harlow, filling in for Alisyn Camerota, welcomed Porter onto the program, the spokeswoman decided to bring up Harlow’s pregnancy as a way of focusing the conversation on the pro-choice stance of Moore’s Democratic opponent Doug Jones.

“It’s great to be with you, and congratulations on your unborn child,” said Porter. “That’s the reason why I came down as a volunteer to speak for Moore, because he will stand for the rights of babies like yours in the womb where his opponent will support killing them until the moment of birth.”

Harlow kept her cool, saying, “Janet, thank you for being with us, and I appreciate the congratulations on our son on the way.”

Porter brought up the CNN anchor’s pregnancy again later, which prompted Harlow to ask her to “leave my child out of this.”

Harlow is pregnant with her second child.

The special election to take over the Alabama senate seat from now-Attorney General Jeff Sessions takes place one week from today.