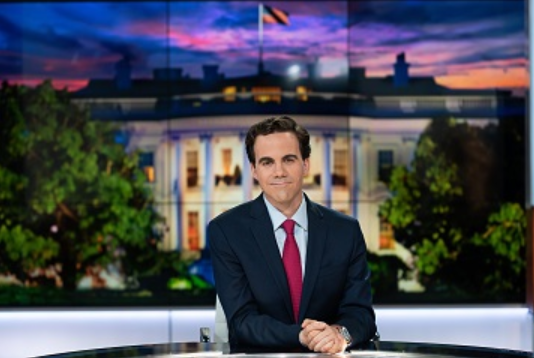 Due to the pandemic, journalists have been unable to crisscross around the country and take the pulse of the nation. How does the pandemic affect their coverage and ability to discover what Americans are thinking?, asked one participant on the call.

Sreenivasan said that he would have been “one of those people zipping around,” but he won’t let the pandemic stop him. For one, he’s working on getting an RV.

“We actually still have plans to try to figure out how to get into an RV, if that’s the way that it is safe at a distance,” Sreenivasan said. “But whether it is my bedroom or this garage that I’m in at the moment, we have actually tried to pivot and see the opportunity of it. Because at this point, if you can get any guests from Neighborhood X or Neighborhood Y, why can’t it be a different type of guest? Perhaps it is not somebody that you’re automatically falling back on your old Rolodex, saying, ‘Well, I could get this person from a think tank to talk.’ How about the person who lives in this community? Is there a way to find them through social media channels, to get them? Their Skype or their Zoom, their opinion is just as legitimate as everybody else’s, right?

“I think if there’s a way to try to harness that to reach parts of the country that we hadn’t done before, just because we had this inherent easy button or biases when we were on the road and parachuting into places, maybe we can learn to be better reporters now and then when we do get back in the field, those habits stick.”

A political reporter for the Washington Post, Costa spoke about the panel program he hosts for PBS on Friday nights, Washington Week, and how the program has had to adjust during the pandemic. After all, this is a roundtable show, and you can’t have figures at a roundtable during a pandemic.

“This pandemic has upended our entire production, staffers working from home and, of course, the reporters who usually sit around the table can no longer be at the table,” he said. “So it has become entirely remote. Yet, we have seen during this period—it has almost been a crisis for journalism, politically, to not be out on the campaign trail, talking to voters—we have seen our strongest ratings in years. We have seen our audience respond in a powerful way. We are doing our best to still make sure we are bringing our reporters to the table in remote ways.”

Hoover was asked to compare her role as a panelist on CNN programs with hosting a PBS program.

“Firing Line is very different from cable news. It is a long-form, extended exchange of ideas where we are able to engage really seriously and rigorously in a back-and-forth that doesn’t end in eight minutes, right?,” she said. “It is 26 minutes without commercials. That allows us to really dive deep into issues, to ask a follow-up of that answer, a follow-up of that follow-up. So there’s no getting away from me when you’re in front of me in this kind of context. Of course, it is not on set anymore. That is fundamentally different than being a panelist on a cable news show.”

Ruiz, filmmaker of the upcoming Voces program Latino Votes: Dispatches From the Battleground, a film that follows the high-stakes effort to mobilize the ever-growing Latino electorate in this year’s election, was asked about the importance of the Latino vote in Nevada and discussed how Sen. Bernie Sanders was able to win the state’s Democratic primary.

“The work that Chuck Rocha, senior advisor to the Sanders campaign, and others did, including a number of local organizers and community activists, does, I think, to many people provide a lesson for future campaigns, regardless of political affiliation, to think about ways to engage in a meaningful way,” said Ruiz. “It was one of the things we were excited to capture in the film and show to audiences, that apparently when resources and genuine engagement happens, you can get results like the ones we saw in Nevada.”

Ruiz was also asked about Latino turnout in this election.

“Will Latino voters turn out? And what will that turnout look like? It really depends who you talk to, but in the states that we cover in the film, Nevada, Texas, Pennsylvania and Florida, we are seeing some very deep engagement and the likelihood of serious participation,” he said. “Although, you know, this is 2020, so it is anybody’s guess what will happen in the next 99 days.”