NEXT:Scoreboard: Tuesday, June 4
PREVIOUS:Erin Moriarty on How 48 Hours Has Evolved: 'The Audience Is Far More Interested in Pushing Us Towards More Complex Cases' 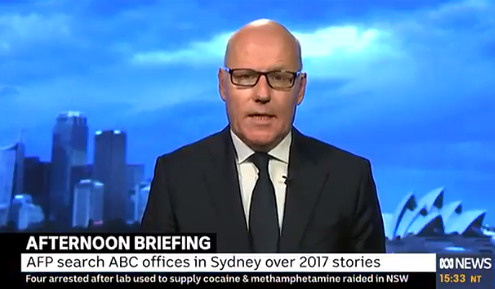 Wednesday morning, Australian Federal Police (AFP) raided Australian Broadcasting Company (ABC), based in Sydney, saying it was acting on a “referral” from the Australian Defence Force over “allegations of publishing classified material.”

This move came the day after the AFP raided the home of News Corp Australia political editor Annika Smethurst. According to police, they raided the journalist’s home for matters related to “alleged publishing of information classified as an official secret.”  Smethurst published a story last year concerning top-secret plans to expand surveillance of Australian citizens. She has yet to be charged.

As one might expect, Australian journalists are furious by these actions and feel that press freedoms have been violated. Two police raids in two days on Australia’s national broadcast network and a top political journalist have raised concerns about press freedom in the country; and understandably so.

ABC News executive editor and head of investigative journalism John Lyons tweeted the police raid and called it “a bad, sad and dangerous day for a country where we have for so long valued and taken for granted a free press.”

ABC connected the police investigation to a story it published in 2017 called The Afghan Files, which revealed allegations of unlawful murders and general misconduct by Australian elite special forces in Afghanistan. The network has criticized the raids and promised to stand by its journalists, Dan Oakes and Sam Clark, the two men behind the story.

Australian police went through 9,214 computer files, and seized roughly 50 documents on Wednesday, but agreed to seal them for two weeks in order to give the ABC time to appeal the warrant (shown below).

Page one of warrant… pic.twitter.com/gRJAm8p60B

And so it’s off into the night for the six AFP officers. For nine hours they’ve searched through ABC emails and documents. I think there’s a big question for the Australian public: is this what a free press looks like? Thank you all for your interest today. Regards, JL. pic.twitter.com/EXnXhyOPQQ

International news outlets have expressed support for ABC. The BBC described the raid on ABC as “a deeply troubling” attack on press freedom. “At a time when the media is becoming less free around the world, it is highly worrying if a public broadcaster is being targeted for doing its job of reporting in the public interest,” the company said in a statement.

Despite these actions, Australia’s prime minister Scott Morrison claims the country “believes strongly in the freedom of the press,” but that there were “no plans to make any changes to existing laws.”

The AFP said it too believes in freedom of the press. It says proof of this is their decision to allow Lyons to live-tweet the police executing the search warrant.

Lyons appeared on television yesterday to talk about what has transpired.

“I’ve never seen an assault on the media as savage as this… I’ve never seen a warrant this comprehensive & I’d say scary… The chilling message is not so much for the journalists, but it’s also for the public,” head of ABC Investigations @TheLyonsDen tells @PatsKarvelas #auspol pic.twitter.com/8sB4KVe8WY