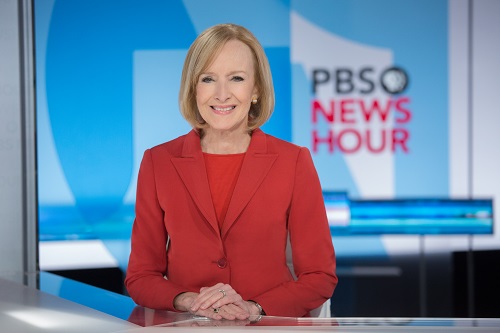 “As trained journalists, what we do is we report and we provide context, but our personal opinions don’t get into the picture,” Woodruff responded. “Sure, we are human beings. I don’t like to use the term ‘objective.’ When someone asks, ‘Can you be objective about the news?’ I’m not a machine. I’m not a computer. I’m a human being, I’m a sum total of all my life experiences.

“Yes, I do have personal opinions, but I try to be fair,” she added. “I try set that aside and that’s what I’ve done throughout my career and it’s what all of our colleagues at the NewsHour do.”

Desjardins added, “Both political parties are flawed, and my job is to ask questions of them. But I think something that stands out—and I’ve worked at other national networks as a reporter—but what stands out at PBS is that honestly; we’re all kind of a bunch of nerds. So that’s one way that we deal with this issue. We’re trying to get information and to really tell big stories. We’re trying to get caught up in personal drama, or personal opinion.”

Newshour executive producer Sara Just then weighed in on an question about balancing the newscast, meaning bringing nonbreaking news topics into the broadcast.

“We absolutely think about that,” said Just. “We’re all a little overwhelmed with the news that’s happening in the world, and how could you not be?”

She added, “We feel we have an obligation to cover the most important stories and the most important issues that are happening in our world, but to also remember there are other stories besides the daily top headlines that people care about. We’re continuing to cover climate change. We’re continuing with our arts coverage. … We seek to make room for these other issues.”

Woodruff conceded that it is tough. “I have some people writing me and saying, ‘Too much pandemic, I’m so depressed, I can’t stand it anymore,’ and I have other people saying, ‘I can’t get enough of this, why aren’t you doing it nonstop?’ she said. “It is a balancing act, and we have 55, 56 minutes per night. That sounds like a lot of time, but there’s so much to cover. Every American is affected now by this pandemic. Every person on the planet. We are covering what’s happening in other countries.”

Woodruff then cited the Black Lives Matter as story that merits wall-to-wall coverage as well. “This is a story that affects every American because we are called on to look at our history, to look at where we’re going,” said Woodruff. “You could fill up either show with one of those stories. It’s a constant balancing act. We’re constantly talking among ourselves about the best way to report them.”

Alcindor went on to share her White House press briefing process. The award-winning correspondent has been a target of Trump’s ire on many occasions over the years.

“The way that it’s navigated is the president decides who he wants to call on that day, and reporters try their best that day to get picked,” said Alcindor. “I will say that every time I come to the White House, I have a list of questions. Part of that list is news of day, part of that list is what’s going on around the world, and part of that list is about social justice and race.”

Alcindor says a good chunk of her work and that of NewsHour is about civil rights journalism and how people are treated in America.

Woodruff will anchor coverage from the newscast’s Arlington, Va., studio, with Nawaz, Desjardins and Alcindor reporting in the field and/or remotely.

Special coverage of each convention will air on PBS stations nationwide and across PBS NewsHour’s and PBS’s digital platforms.