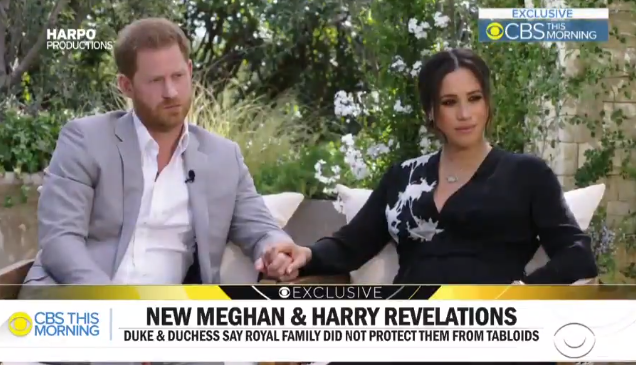 Oprah Winfrey joined the team at CBS This Morning live on Monday for what will probably end up being one of the most-watched episodes in the morning show’s history.

This appearance came the morning after her prime time special — Oprah with Meghan And Harry: A Primetime Special, which aired on CBS Sunday right after 60 Minutes.

Winfrey’s interview, which she said went for 3 hours, 20 minutes but had to be edited down to one hour and 25 minutes, featured a significant number of revelations, including the gender reveal of Meghan Markle and Prince Harry’s second child (it will be a girl), Markle’s admission that she contemplated suicide, as well as her stunning statement that when she was pregnant with her firstborn, Archie, members of the Royal Family were worried about “how dark his skin might be.” (Winfrey later told the crew on CBS This Morning that it was neither the Queen or Prince Phillip who made the remark).

The couple also disclosed to Winfrey they were cut off from the royal family after leaving, with financial support and the security that the prince had had his entire life revoked early last year. Markle said she begged “the palace” to permit Prince Harry security, but the request was denied.

Prince Harry and Meghan, Duke and Duchess of Sussex, sat down with @Oprah in their first major interview since stepping away from royal duties.@Oprah joins us exclusively with her reaction on that revealing interview. #OprahMeghanHarry pic.twitter.com/M4oqmbKGfR

She teed up another part of the interview where Prince Harry discloses that in January 2020, after announcing their intention their plans to step back as senior members of the Royal family, they were then invited to spend time with his grandmother, Queen Elizabeth, but the plans abruptly changed citing she’s “busy all week.”

In January 2020, Prince Harry and Meghan announced plans to step back as senior members of the Royal family. In this exclusive clip, they tell @Oprah they were then invited to spend time with his grandmother, the Queen, but the plans abruptly changed citing she’s “busy all week.” pic.twitter.com/dLhq0SAgfN

On whether any family members have reached out to apologize on what transpired, Prince Harry said they had not:

WATCH: @Oprah asks Prince Harry if family members reached out to apologize for the reasons he felt he had to leave.