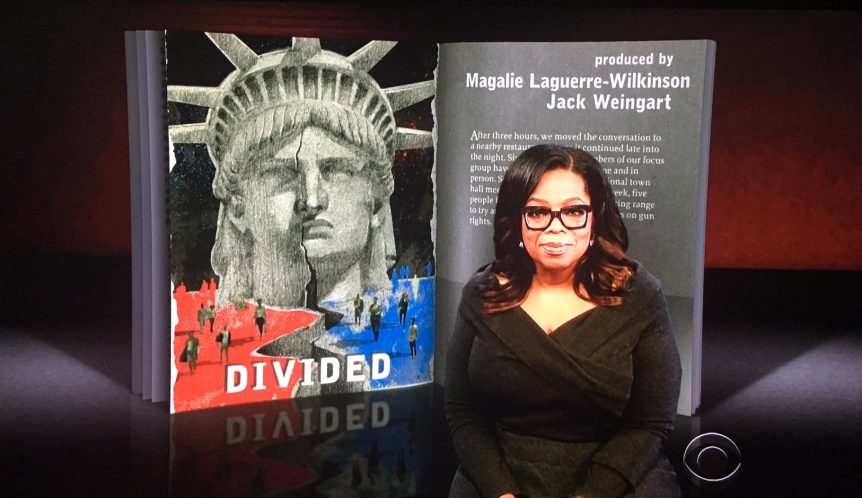 Oprah Winfrey was interviewed by The Hollywood Reporter as part of its Empowerment issue, and spoke to a variety of topics, including some notable comments on why she is no longer a 60 Minutes contributor.

Winfrey’s first story as 60 Minutes contributor was about a divided America, and featured Winfrey leading a focus group of people from different backgrounds, hailing from different parts of the country. It aired during the 50th season premiere of 60 Minutes on Sept. 25, 2017. She had been introduced as a special contributor in January, 2017.

THR: Let’s talk about the cultural reckoning that’s going on. One of your 86 jobs is at 60 Minutes, which has been rocked by its share of #MeToo incidents …

Winfrey: It was not the best format for me… How should I say this? Never a good thing when I have to practice saying my name and have to be told that I have too much emotion in my name… I think I did seven takes on just my name because it was ‘too emotional.’ I go, ‘Is the too much emotion in the Oprah part or the Winfrey part?’ I was working on pulling myself down and flattening out my personality — which, for me, is actually not such a good thing.

THR: I hadn’t realized. How come?

Winfrey: I’d actually gone to [former 60 Minutes executive producer] Jeff Fager prior to the whole CBS (pantomimes an explosion) and said I was going to be working with Apple and that it didn’t mean I would never do something [with 60 Minutes] but I would probably be taking all of my energies and putting them into whatever I wanted to do at Apple. It was an interesting experience for me. I enjoyed working with the teams, and I’m probably going to work with some of the freelance people on my Apple stuff, but it was not the best format for me.

In addition to her upcoming work with Apple and being told by 60 Minutes that her name “has too much emotion” and that she has to “practice” saying it for the show (sort of an odd request), Winfrey was asked to comment on her friend Gayle King’s decision to renew at CBS News. While she might have had an influence on the process (although it had already started by the time she had called King’s agent), the influence seemed peripheral.

THR: Gayle has made the choice to stay at CBS News. What advice did you give her during what became a very high-profile negotiation?

Winfrey: I said, “Get what you want. Get exactly what you want because now’s the time. And if you don’t get what you want, then make the next right move.” Even without me, she was going to do that. But that was my advice, and I actually called up her lawyer, Allen Grubman, and I said, “Allen, she should get what she wants.” And Allen goes, “What the F do you think I’m doing here? I said the same thing to her!” The negotiation was already happening before her R. Kelly interview.

Winfrey also praised King on the R. Kelly Interview, saying, “It could not have been better if I had done that myself.”

I think every interviewer thinks, “What would you have done in that moment?” And what she did was absolute perfection. I just thought that for this moment to happen at the time when she’s also in the middle of negotiations is unbelievable — but she’s always had that [gift]. One of my girls who is studying to be a journalist sent me a text saying, “Oh, Auntie Gayle, broadcasting goals.” And I said, “Not broadcasting goals, life goals. Your life goal [should be] to be able to be centered in the middle of whatever storm is showing up in your life.”