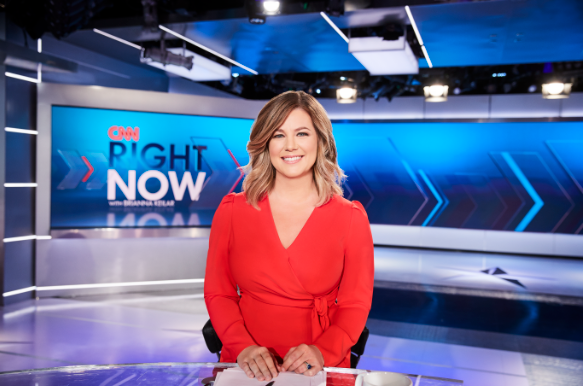 Fast forward 14 years, and the Mission Viejo, Calif., native is now one of CNN’s most recognizable faces in dayside.

After many years of reporting from the field and serving as a fill-in for Wolf Blitzer on his broadcasts, Keilar, 39, was finally given her own hour last year.

CNN Right Now with Brianna Keilar launched Nov. 12, 2018, one year ago today, and airs weekdays at 1 p.m. ET; the slot once home to Wolf.

We spoke with Keilar right before the one-year anniversary of her show about what life is like at CNN, and about her column, Home Front, which endeavors to create understanding between military community, and the civilian community. It’s a timely topic considering the recent Veteran’s Day holiday.

*This Q&A has been lightly edited and condensed for clarity purposes.

TVNewser: CNN Right Now with Brianna Keilar turns one today. You took over for Wolf [Blitzer], who had been anchoring that hour for the last several years. How have you made the 1 p.m. hour your own?

Keilar: I think we’ve made 1 p.m. our own by approaching stories at a different angle. Sometimes it’s obvious what the news of the day is, and sometimes I think we take one element of whatever happened in a day and we dig deep into it. An example might be when we have one of these hearings of the impeachment trial to really explore who the person is testifying because it can really get lost in the shuffle when there’s so many details and there’s so many names that you need a flow chart. Or if we’re talking about immigration, we might find a new angle on it. We’ve interviewed a gay couple who used a surrogate in Canada. When the couple did that during the Obama administration and had their son, it was no problem. They brought him back. He was an American citizen. They did the same thing with their daughter recently, and the State Department is denying her citizenship. So just bringing light to stories through people.

Another way that we’ve made the hour our own is through this cool cross-platform series called Home Front. On our show we have this place to talk about military families and military issues that civilians might be interested in, as we try to kind of create understanding between military communities and the civilian communities. So I think that’s one way that the shows really stands out.

Talk about your Home Front column. Why did you launch it and why is it something our readers should be aware of and want to engage with?

Last year, when we were going to launch the show in mid-November, I was really looking forward to it. I had just come back from maternity leave not long before, and I was thinking, “Okay, I’m really going to help my husband take over responsibilities this week, so I can concentrate on this big new thing I’m doing professionally.”

Then I found out he had to go out of town on a work related trip. I’m a military spouse. He was going to be gone the week I was launching my show, and there was nothing I could do about it. That’s what was going to happen and it was going to suck because our baby wasn’t sleeping great, and I just had to push through it. I hardly remember launching the show. But once he had deployed a little later, I just felt like like I was leading these two lives: I’m home, I’m holding down the fort as a military spouse at work. Then, at work, I’m doing what I’ve always done, and now that’s anchoring the show. I talked to a friend who works at a nonprofit for military families, and I started thinking, “well, maybe I could tell some stories and I could use my platform to make people see what military families are going through.” Plus, I thought this would also be good for me, because I would be kind of marrying these two lives that I was leading.

So, that’s what I did, and it has been awesome. The response has been really great. I get a lot of story ideas just from viewers who write in and I personally have found it really rewarding.

Talk a bit more about your work-life balance, because your situation is especially unique.

I will say this, being an anchor is easier than being a reporter, because one of the things I’m able to do is essentially work a bit of a split shift. I split my day almost into three parts: Try to wake up early, and get in a little bit of reading and just an over view before my kids wake up at 6:30 or 7 a.m. Then, I’m very focused on them, until school and childcare starts. Then I go to work, and I anchor my show. Then, I try to go home and really spend the quality time period which for me is the kind of afternoon-evening-bedtime. Then I pick work up again after that. At night, I’ll either be reading and catching up, or I might be making calls, or I might by Skyping with people I’m interviewing for the column. Or I might be writing the column.

It has taken me a little while to figure out the flow that works best for me, and also, to not worry too much about the fact that I can’t just go for hours on end, like maybe I used to do. I also realized that’s easier to do as an anchor than it is to do as a reporter.

It’s really a challenge. You have to figure out what works for you as a parent, and it’s hard to do everything all at once. What I’ve tried to do is focus on either my job or being a mom, and just go really hard on that so that I can feel like I’m doing my best job at both roles.

You’ve been at CNN for 13 years now. Lots of different regimes. What does [CNN president] Jeff Zucker bring to CNN that is different from prior CNN presidents?

I think Jeff brings a lot of involvement and interest in what we’re doing day to day, and he is just really plugged in. He watches every show. He’s very in touch with the content that is going out on the network. I really like that. We’re a network and so each show should not be an island unto itself. I think it really helps us have a conversation about how we’re covering the news, and also how different shows might be covering the news and in a different with different angle. For instance, that’s what I told you we like to do. It just helps to have that centralized.

You were the network’s lead reporter following the Hillary Clinton campaign, and you were there on Election Night. Tell us what you remember about the scene there.

I remember going into the [Jacob] Javits Center and there was just this sense of everyone knew how the night was going to end. Clinton staffers were very confident. Then as some of the returns started coming in, and it became clear she was losing states that she should have won, there was initially from the Clinton campaign, this message of, “there still a path.” Then, as things got worse for her and better for Trump, they went dark. I couldn’t get hold of a Clinton staffer for like well over an hour, and they I started looking around the room and I saw people there on the floor of the Javits Center in front of the stage where they had anticipated Hillary Clinton would come out to celebrate.

There different phases. First, they were looking worried. Then, they were crying and leaning on each other. And then I remember [Hillary Clinton campaign chairman] John Podesta coming out and saying that basically the night was a wrap, and that they’d be talking tomorrow, the next day, and that’s when we first heard from Hillary Clinton after the election.

You’re a Cal-Berkeley grad. How often do you get back to your alma mater?