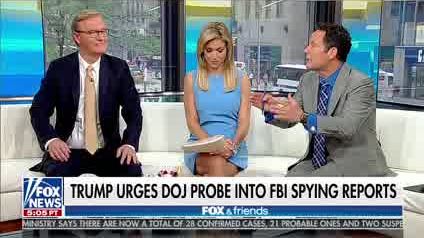 It wasn’t the first time, but in a series of tweets, between 6:54 a.m. and 7:33 a.m. this morning, and including a reference to the “Criminal Deep State,” President Trump tore into his critics and lauded two of his best media defenders.

When Judge Andrew Napolitano went on Fox & Friends First at 5:54 a.m. saying, “It is clear that they had eyes and ears all over the trump campaign,” Trump tweeted an hour later:

Even before her appearance on Fox & Friends, just after 7:30 a.m. ET, the president tweeted about Fox News analyst Tomi Lahren:

Everybody is with Tomi Lahren, a truly outstanding and respected young woman! @foxandfriends

And after Steve Doocy reported on former Director of National Intelligence James Clapper‘s comment on The View yesterday, in which Clapper agreed with Joy Behar that Trump “should be happy” that spying exists to root out a potential foreign enemy, Trump tweeted:

“Trump should be happy that the FBI was SPYING on his campaign” No, James Clapper, I am not happy. Spying on a campaign would be illegal, and a scandal to boot!

The president ended his series of tweets, which also included comments on trade with China, Dodd Frank and U.S. autoworkers, with this: