NEXT:Report: Al Sharpton to Move From 8 a.m. to 5 p.m.; David Gura Gets Expanded Role on Weekends at MSNBC
PREVIOUS:Here's How a 'Young Influential' Has Enabled CNN's Branded Content Studio to Thrive 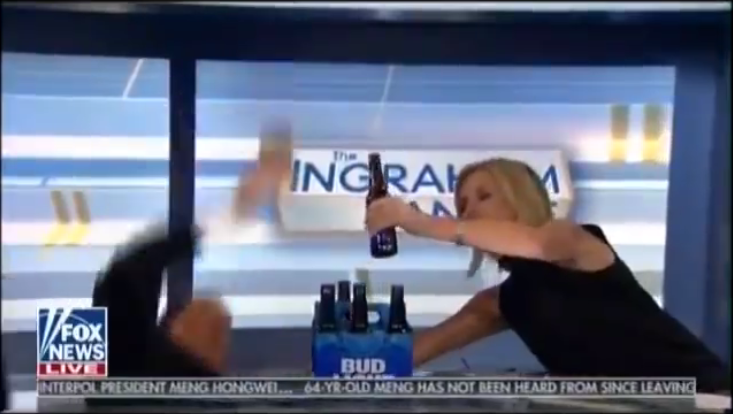 Here’s a funny moment that might lift your spirits after what has been a chaotic couple of weeks in media and political circles.

Fox News contributor Raymond Arroyo fell out of his chair during Friday’s broadcast of The Ingraham Angle while trying to take a selfie with host Laura Ingraham and a six-pack of Bud Light.

Arroyo was on Fox News’ 10 p.m. show to talk about the news that Trump’s Supreme Court nominee Brett Kavanaugh had earned the requisite amount of votes necessary to be confirmed to the SCOTUS, but the conversation briefly turned to the “selfie suicide movement,” a trend that has seen hundreds of people die over the past few years while taking selfies in hazardous locales.

“OK, before I go,” Arroyo remarked. “I thought just to bring it all together, Laura.”

Arroyo then took out the six-pack, which was in reference to Judge Kavanaugh’s penchant for drinking beers. During his testimony last week before the Senate Judiciary Committee about sexual assault allegations being levied against him, Kavanaugh talked about how much he loved (and loves) to drink beer.

“I like beer,” Ingraham said as Arroyo handed her a bottle.

Arroyo then took out his phone to take a selfie.

“Go the edge,” Ingraham remarked, before Arroyo tumbled out of his chair.

Ingraham played it off as though nothing had happened.

Ingraham says the whole thing was a gag:

For all of you concerned viewers, @RaymondArroyo’s fall during our Kavanaugh-Toast selfie was a JOKE…a pratfall after a long week. #Laughter #selfiecide

Did people really not know this was a gag? @RaymondArroyo crawled up from the floor at show’s end for a closing comment. #pratfalls https://t.co/XwEjM9epyt