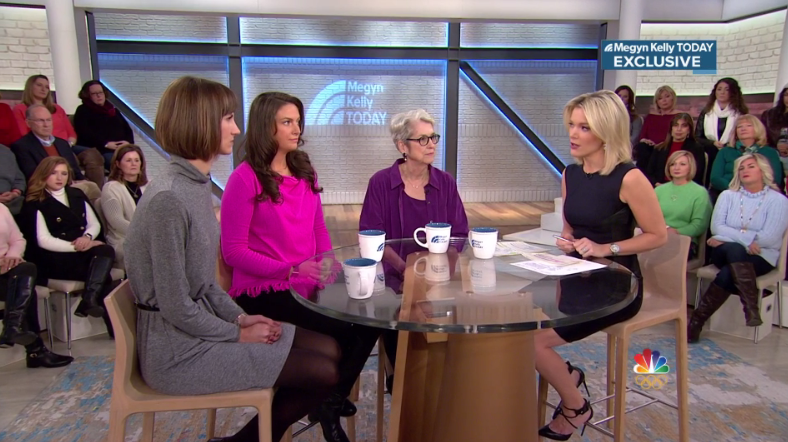 After a bumpy start, Megyn Kelly appears to be making her mark on morning TV with her consistent coverage of sexual harassment allegations against powerful men. This morning, the host turned to Pres. Trump.

“America is having a ‘Me Too’ moment, as men … are being outed and punished for sometimes decades of sexual misconduct,” Kelly said during the show’s open. “But does that accountability extend to the Oval Office?”

On Megyn Kelly Today, three women, who have publicly accused Donald Trump of sexual misconduct, were live in studio sharing their stories together for the first time.

Yes, three women went on national television to share their stories that the now-President of the United States sexually harassed them years ago. Pretty extraordinary.

Jessica Leeds, Samantha Holvey and Rachel Crooks were the women who shared their stories with Kelly this morning.

“The first interaction with Trump is that he lined all of us up and he goes down – and I thought this was going to be a meet and greet, like ‘hi, how are you? It’s nice to meet you,’ and it was not,” said Holvey. “It was, ‘hi,’ just looking me over like I was just a piece of meat, I was not a human being, I didn’t have a brain, I didn’t have a personality, I was just simply there for his pleasure. It left me feeling very gross, very dirty, this is not what I signed up for.”

“I worked at Trump Tower at a company that actually did business with Trump, and I saw him frequently because I sat right out front behind glass doors and he used the elevator bank to get to his residence, right outside our office,” said Crooks. “So I would see him almost daily, waiting for his elevator and on one day, I decided to introduce myself because I did see him regularly. And he shook my hand and he kind of gave me the normal double cheek kiss but then he held onto my hand and he kept kissing me. He kept asking me maybe a question, where you from? Kissing me again, and again. It was right outside the elevators, right outside my office.”

Leeds described being on an airplane with Trump in the late ’70s.

“After the meal was cleared, all of a sudden, he was all over me, kissing and groping and groping and kissing, and believe me. My memory of it was, nothing was said. He didn’t say, ‘oh by the way,’ and I didn’t go, ‘eek,’ or help or whatever, it was just this silent groping going on,” recalled Leeds.

She says she encountered Trump after the incident.

“He stands there, as I am handing him his table assignment and he says, ‘I remember you, you were that – woman from the airplane.’ He called me the worst name ever.”

Kelly noted that Senator Cory Booker has called for Pres. Trump resign in the wake of the allegations. The U.S. ambassador to the United Nations Nikki Haley recently said that the president’s accusers deserve to be heard.

Trump has been accused sexual misconduct by many women over the years, in addition to the trio, even bragging about it on a hot mic while preparing for an appearance on NBC’s Access Hollywood in 2005.

Kelly and Trump have been at odds for years, stemming back to the weeks leading up to the first GOP primary in 2015.

“On the phone one night, he called me to yell at me, berate me and eventually hung up on me days before that first presidential debate because of a segment I had done on The Kelly File talking about Ivana Trump‘s sworn deposition accusing him of rape,” Kelly recalled during a panel at Business Insider’s Ignition conference earlier this month.

“I never stopped covering him fairly even though the security threats in my and my children’s lives skyrocketed, I was not his chew toy. He continued to try to bully me. He wasn’t successful. At the end of 9 months of relentless attacks, over 100 tweets, there’s a fever pitch already against me. He could never get past it. I went right to Trump Tower and stood him down.”

The White House issued a statement during the show, which Kelly read live on-air:

These false claims, totally disputed in most cases by eyewitness accounts, were addressed at length during last year’s campaign, and the American people voiced their judgment by delivering a decisive victory,” the statement read. “The timing and absurdity of these false claims speaks volumes and the publicity tour that has begun only further confirms the political motives behind them.

“It is laughable,” responded Crooks.