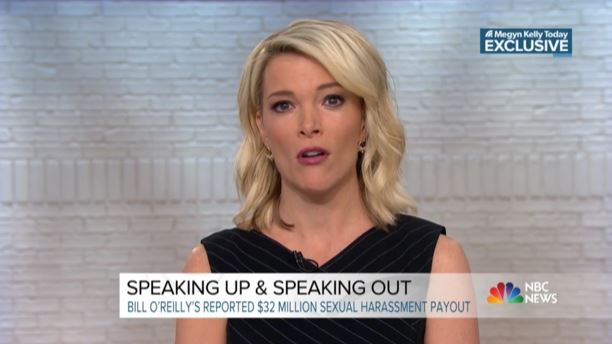 “Fox News was not exactly a friendly environment for harassment victims who wanted to report, in my experience,” said Kelly in an opening monologue. “However, O’Reilly’s suggestion that no one complained about his behavior is false, I know because I complained.” Kelly referred to a clip from CBS This Morning last November in which O’Reilly said he wasn’t interested in talking about the claims or in talking badly about his network.

“I wrote an e-mail to the co-presidents of Fox News, an e-mail I have never made public but am sharing now because I think it speaks volumes about powerful men and the roadblocks one can face in taking them on. I wrote, in part, ‘perhaps he didn’t realize the kind of message his criticism sends to young women across this country, about how men continue to view the issue of speaking out about sexual harassment.'”

“At Fox News the media relations chief, Irena Briganti, is known for her vindictiveness,” said Kelly. “To this day, she pushes negative articles on certain Ailes accusers, like the one you are looking at right now (as Kelly referred to herself). It gives me no pleasure to report such news about my former employer, which has absolutely made some reforms since all of this went down. But this must stop. The abuse of women, the shaming of them, the silencing of them after the fact, it has to stop.”

Kelly said she’d gotten along with Briganti for many years, until Kelly wouldn’t back Ailes when he was under fire in July of last year. Ailes was dismissed from Fox two weeks after Gretchen Carlson filed a sexual harassment suit against him. He died in May.

Kelly’s monologue was followed by an interview with O’Reilly accuser Juliet Huddy who spent 18 years at Fox.

Update: Ratings for this episode are in: