NEXT:Chuck Todd Attacks the Trump Administration For its 'War on the Press'
PREVIOUS:Pres. Trump Goes After 'Psycho Joe' and 'Crazy Mika' 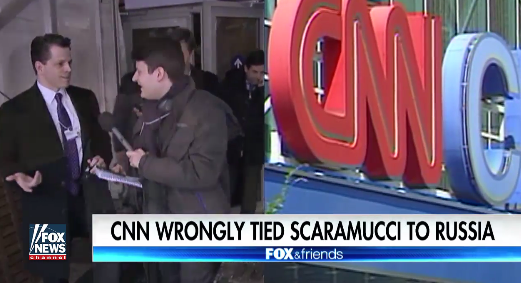 Former FBN host Anthony Scaramucci, who is now working as strategy officer for the Export-Import Bank, is detailing his side of the story of the now-retracted CNN report that tied him to a Russian investor.

After CNN published its story last week, Scaramucci said he “had a couple conversations with senior staff at CNN. I made it very clear to them the story was not accurate and it was defamatory story.”

“I am not a journalist. But I did play one on television on your sister network,” said Scaramucci, who hosted the iconic Wall Street Week for much of last year after it moved to FBN. “I have some empathy for journalism in terms of the race to get the news out and beat the competition. But what I do think they have to do now is have more checks and balances in the system.”