NEXT:Thursday, April 9 Scoreboard: Outside of the Task Force Briefing, The Five Was No. 1 on Cable News
PREVIOUS:GMA Producer Thea Trachtenberg Passed Away Easter Morning 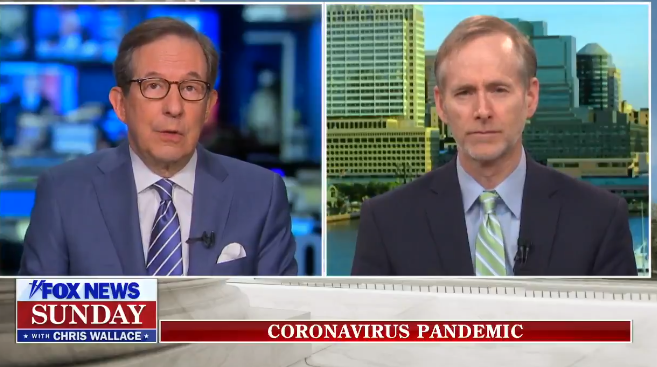 President Trump spent a chunk of his Easter Sunday tweeting insults about the media. One of his targets was Fox News Sunday host Chris Wallace, respected throughout the media industry, but not by the president. At least not today.

Trump sent the below tweet at 3:45 p.m. ET, apparently ticked off about something he had seen on that morning’s broadcast of Fox News Sunday.

Just watched Mike Wallace wannabe, Chris Wallace, on @FoxNews. I am now convinced that he is even worse than Sleepy Eyes Chuck Todd of Meet the Press(please!), or the people over at Deface the Nation. What the hell is happening to @FoxNews. It’s a whole new ballgame over there!

Trump’s original tweet might have been a reaction to a guest of Wallace’s saying that the U.S. should not lift quarantines on May 1, a date Trump has stated he’d like to reopen the entire country by.

Dr. Thomas Inglesby on whether or not the U.S. should lift quarantines by the end of April: “I think it’s going to be too soon, unfortunately, by the end of this month.” #FNS #FoxNews pic.twitter.com/3Tdo4QJbE2

Trump is a vocal fan of Fox’s opinion hosts, but he’s never been particularly fond of Wallace. Of his relationship with the president, Wallace told Stephen Colbert in 2018: “He’s let me know that he doesn’t think I treat him fair.”

And whenever Trump has gone after Wallace, he has compared him to his father, the iconic 60 Minutes journalist Mike Wallace, like he did during a Nov. 18, 2018 interview. If Mike Wallace were alive today, it’s highly doubtful he would have gone any easier on the 2020 version of Trump. The elder Wallace interviewed Trump in 1985,