NEXT:Rupert Murdoch On Potential For Fox-News Corp Reunion: 'If We Ever Do, That Would Be Years Away'
PREVIOUS:ABC News Adds to London Bureau 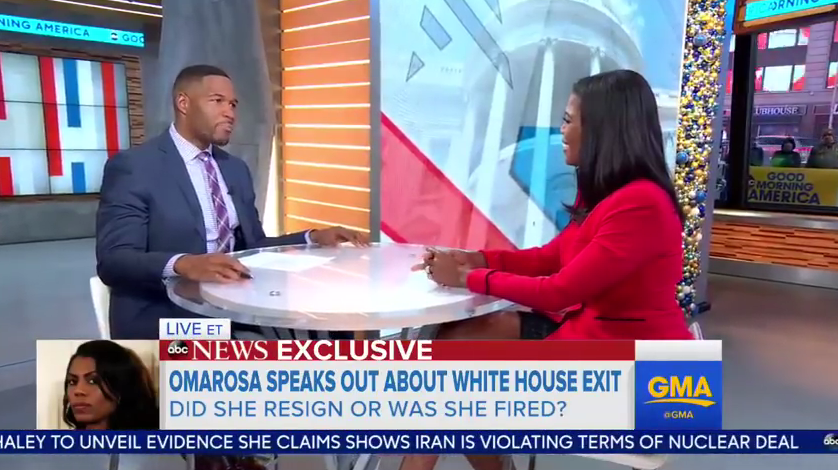 In her first interview since being dismissed Tuesday night by White House chief of staff John Kelly, soon-to-be former Office of Public Liaison official, and former Apprentice contestant, Omarosa Manigault Newman says the story that she was escorted off the White House grounds is false.

In an interview on Good Morning America, Manigault Newman is blaming “one individual who has a personal vendetta against me.”

Though not by name, she is presumably referring to American Urban Radio Networks Washington bureau chief April Ryan.

According to multiple sources Omarosa did not resign. She was even escorted out of he building and off campus.

Sources say General Kelly did the firing and Omarosa is alleged to have acted very vulgar and cursed a lot and said she helped elect President Trump. The word is a General Kelly had it and got rid of her.

Okay the White House still contends Omarosa signed a resignation letter. But Gen Kelly Kicked her out will high drama with the Minister offering vulgarities and curse words as she was escorted out of the building and off campus

Manigault Newman also told Michael Strahan that the decision to resign was her own, and came after having a lengthy conversation with chief of staff John Kelly in the Situation Room, where she shared her concerns about the job.

“If there had been such a fight, where are the pictures or videos?,” Manigault Newman asked.

The three-time Apprentice participant, whose working relationship with Trump goes back to 2004, told Strahan that as “the only African American woman in this White House senior staff, I have seen things that have made me uncomfortable, that have upset me and affected me deeply and emotionally and affected my people and my community.” She said that when she is able to share her thoughts and experiences of working in the Trump administration, it will be “a profound story that everyone will want to hear.”

Manigault Newman also noted that she had “more access than most people” to the president, which angered some of her colleagues. “People had problems with our 14-year relationship,” she said.

Strahan did not ask about reports that Manigault Newman brought members of her 39-person wedding party to the White House for a photo shoot earlier this year.

At the close of their GMA report on her departure Robin Roberts uttered, “Bye Felicia,” which stems from the 1995 film Friday, and is often used to dismiss someone or something with certainty.

Update: In a text message sent to Inside Edition, Manigault Newman responded to Roberts’ comment, writing: “That was petty. It’s a black woman civil war.”