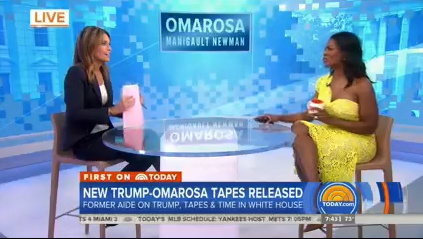 The Omarosa book tour continued this morning on another NBC News program, with reality TV personality/former Trump White House staffer Omarosa Manigault Newman sitting down with Savannah Guthrie on Today talk about the contents of Unhinged: An Insider’s Account of the Trump White House.

As was the case during her appearance the previous morning on Meet the Press with Chuck Todd, a secret audio recording she had made of chief of staff John Kelly firing her in the Situation Room was played during the segment.

In addition to audio of the firing, Manigault Newman – for years was one of the president’s biggest boosters (at least in public) – also alleges that additional audio exists of President Trump saying the “n-word” during production of The Apprentice.

The interview itself was a bizarre. It began at 7:33 a.m. ET, with Guthrie continuously pressing Manigault Newman about the audio tapes, and wondering why her view of Trump on August 13, 2018 is so different than her previous public statements about him.

At one point, Manigault Newman even tells Guthrie to “calm down.”

Seemingly tired of the questioning, roughly 8 minutes, 48 seconds into the interview, Manigault Newman tells the Today show host she has another interview to do. But it’s not clear where.

“You know that we have an interview right after this, and I know you want to go with more time; and I will answer your last question…” she stated.

“What time do you need to go?” asked Guthrie.

“You know that it’s a 7-minute interview…now we’re at 10,” responded Manigault Newman (it’s unclear if the interview was actually supposed to be 7 minutes).

“Are we? I actually don’t know the time – ” said Guthrie.

“Look, the book comes out tomorrow, and all of this is in the book…and I hope that your viewers will take an opportunity to read it and learn about the incredible journey I had for 15 years had for 15 years with the president of the United States. Every single thing you heard on that tape is in this book and many, many more...” said Manigault Newman.

“The book is called Unhinged…who does that refer to?” asked Guthrie.

And as one probably might have guessed, Trump has responded via Twitter, and he even admits his responses are “not presidential.”

While I know it’s “not presidential” to take on a lowlife like Omarosa, and while I would rather not be doing so, this is a modern day form of communication and I know the Fake News Media will be working overtime to make even Wacky Omarosa look legitimate as possible. Sorry!

Wacky Omarosa, who got fired 3 times on the Apprentice, now got fired for the last time. She never made it, never will. She begged me for a job, tears in her eyes, I said Ok. People in the White House hated her. She was vicious, but not smart. I would rarely see her but heard….

…really bad things. Nasty to people & would constantly miss meetings & work. When Gen. Kelly came on board he told me she was a loser & nothing but problems. I told him to try working it out, if possible, because she only said GREAT things about me – until she got fired!