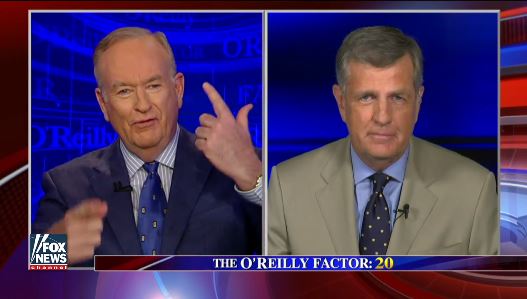 Bill O’Reilly and Brit Hume agree with their Fox News colleague Sean Hannity that CBS should release the full interview that Ted Koppel did with Hannity. Only about 70 seconds of the 45-minute (according to Hannity) interview was used for Koppel’s CBS Sunday Morning story.

O’Reilly and Hume, who both worked at ABC News when Koppel anchored Nightline, say it would benefit CBS to release the transcript.

“I’ve considered Ted Koppel a friend and have always admired him,” said Hume. “I would note, however, he came up when really there only was was the three nightly news programs and the Sunday morning programs… I think that’s the era in which he is comfortable. This is a different universe now,” said Hume.

Later, Hannity spent the first 10 minutes of his show talking about the Koppel interview dubbing it “edited fake news.”

This is not the first time Koppel has explored a divided America. In 2012, when he was a contributor for NBC’s Rock Center, Koppel interviewed O’Reilly for a 2-part story on partisan media.