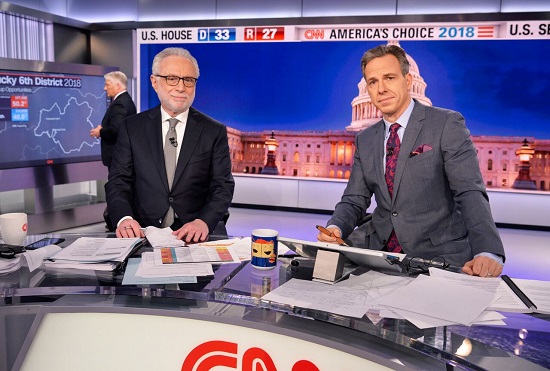 Adults 25-54 is the measurement advertisers have traditionally looked to when deciding whether or not to throw down dollars.

Yet while all of those accolades for November are nice, CNN remained stuck in third place in cable news among total viewers. It also remains in third place among the prime time demo for the entire calendar year to-date.

On the programming front – The Lead with Jake Tapper ranked No. 1 in the 4 p.m. timeslot among adults 25-54, and posted +8 percent growth in the demo from a year ago.

Erin Burnett Outfront beat MSNBC’s Hardball with Chris Matthews in the A25-54 for the sixth straight month. The program has now outpaced MSNBC for nine of the past 12 months.

Anderson Cooper 360 surpassed MSNBC’s All in with Chris Hayes for the fifth straight month in the key demo adults 25-54 month, and posted the show’s second-most-watched November on record.

Cuomo Prime Time posted CNN’s third-largest 9 p.m. November audience on record, and grew more than the 9 p.m. competition. Maddow was up a bit, while Hannity was actually down year over year in total viewers.

Nevertheless, Cuomo remains No. 3 behind the two most popular hosts on cable news.

And last but not least, CNN Tonight with Don Lemon grew the most in all of cable news prime time this month. The 10 p.m. hour of Tonight was +34 percent in total viewers and +15 percent in the demo. 10 p.m. competitors Laura Ingraham and Lawrence O’Donnell were slightly down vs. last November.

CNN had a very robust prime time ratings performance and tremendous growth this month, with the network easily dominating MSNBC in the key demographic adults 25-54 in November.  For the first time since February 2017, CNN beat MSNBC in weekday (M-F) prime time (459k vs. 431k) among adults 25-54.  CNN also topped MSNBC in M-Su prime time (395k vs. 360k) in the key demo 25-54, now for the second straight month.  CNN grew an impressive +42% in total viewers and +36% among adults 25-54 in weekday prime time vs. last year, while MSNBC is down double digits (-10%) in the key demo.  CNN also grew by double digits in M-Su prime time.  CNN’s November ratings hit near presidential election year levels, with the network posting its third-highest November M-F prime time audience in 17 years (since 2001) in total viewers (just after 2008 and 2016). The network also registered its third-highest November M-Su prime time since 2001 in total viewers (also following 2008 and 2016).

CNN also surpassed MSNBC in the other dayparts including total day, daytime and weekends among adults 25-54 this month.  CNN has now beaten MSNBC for 53 straight months in total day in the key demographic 25-54 (231k vs. 183k), the longest monthly streak since January 2010.  This was also CNN’s third-highest November total day since 2001 in total viewers (behind presidential election years 2016, 2008).

Every hour of CNN’s daytime programming (9am-4pm) topped MSNBC’s dayside programming this month among adults 25-54.  During the day, CNN had a +30% advantage over MSNBC in the key demographic adults 25-54 (218k vs. 168k), with CNN now outperforming MSNBC for 57 consecutive months in this important daypart. This is the longest streak on record.  And this was CNN’s third-highest November daytime average in total viewers since 2001 (after 2016, 2008).

CNN’s Sunday morning programs including Inside Politics with John King (8am), State of the Union with Jake Tapper (9am), Fareed Zakaria GPS (10am) and Reliable Sources with Brian Stelter (11a,) all posted more viewers in the key demo 25-54 than MSNBC, ranking #2 in cable news.