NEXT:Scoreboard: Tuesday, Sept. 11
PREVIOUS:Here's What Amy Robach Wants You to Know About 20/20, and Reporting on the News Business 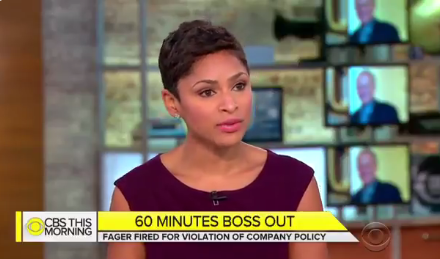 It has been a wild week for CBS Corp., starting with the departure of Les Moonves‘ on Sunday, through yesterday’s firing of former CBS News chairman and longtime 60 Minutes executive producer Jeff Fager.

Combined with the exit of Charlie Rose, that’s now three of the network’s most powerful figures all gone in a 10-month span due to allegations of sexual misconduct and intimation.

CBS News president David Rhodes claimed the firing of Fager was not due to “recent press reports,” (i.e. Ronan Farrow‘s explosive stories), but rather because of a threatening text Fager sent to a CBS News reporter over coverage of the sexual harassment allegations against him.

That reporter is CBS News national correspondent Jericka Duncan, who has been covering the fallout from Farrow’s stories.

Many people have asked if the text Jeff Fager referenced was to me. It was. I’ll have more reporting on this tonight @cbseveningnews @jeffglor

At 6:30 p.m. on Wednesday, Duncan shared the text on the CBS Evening News.

“Be careful,” he wrote. “There are people who lost their jobs trying to harm me.”

Yes, an executive threatening a colleague for trying to do her job, which is investigative reporting. Rather extraordinary.

The text gave Rhodes an easy excuse to get rid of the legendary news executive.

Rhodes (shown below) was stopped on the street by CBS News Wednesday afternoon, and said “I’m not able to talk to you guys about this today.” 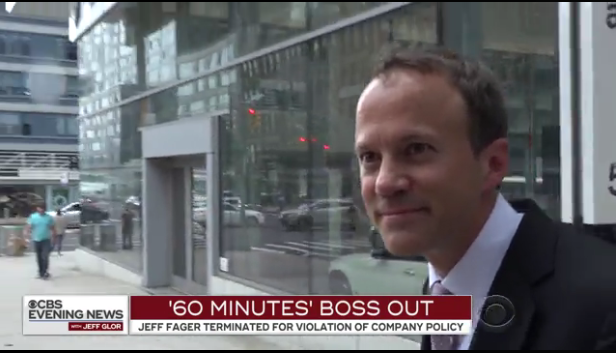 On Thursday, Duncan appeared on CBS This Morning to talk about what transpired earlier in the week, including how she felt when she received the text from Fager on Sunday, and the support she has received from many of her CBS News colleagues since the text went public.

“We at CBS This Morning support you 100 percent,” O’Donnell told Duncan during her appearance.

Did you view the texts from Jeff Fager as a threat?

“I did… and it’s even hard to say that today. Because yes, we do receive harsh language all the time. But this is someone who held an enormous amount of power here who I respected and I was shocked.” https://t.co/ovlUTRShfw pic.twitter.com/KFJ0OcNOUZ