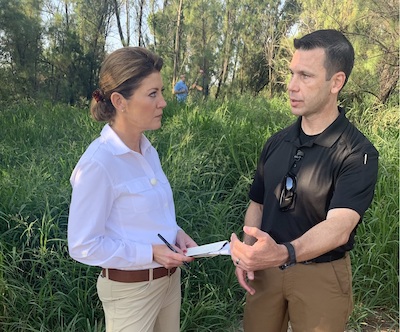 Norah O’Donnell is keeping busy during her first week in the evening news anchor chair.

Tonight, O’Donnell will anchor CBS Evening News with Norah O’Donnell from McAllen, Texas, near the Texas-Mexico border. During the telecast, she’ll air her exclusive interview with acting Secretary of the Department of Homeland Security Kevin McAleenan and look at conditions inside the country’s largest migrant processing center.

It’s the second time in her first three days that O’Donnell is anchoring CBS Evening News from outside the studio. Tuesday night, she anchored live from the Kennedy Space Center, and aired her exclusive interview with Jeff Bezos and Caroline Kennedy about the U.S. space program and the future of space exploration, as the network marks the 50th anniversary of Apollo 11 all week. The interview was followed later that evening by her hour-long primetime special, Man on the Moon.

“We really see that as an opportunity to differentiate ourselves,” O’Donnell told a CBS affiliate last month about taking the broadcast out of the office and into the field. “The broadcast has to have a sense of urgency and go beyond the headlines you already know.”

As TVNewser wrote on Monday, O’Donnell will have her work cut out for her. CBS has been stuck in third place in the evening newscast ratings race going back to the days of Dan Rather. Katie Couric, Scott Pelley, and most recently, Jeff Glor couldn’t help lift the network out of the rut.

CBS Evening News also posted the most significant year-over-year audience audience declines of the three evening newsers this past quarter. Granted, it’s tough to post ratings growth when you’re using a rotation of fill-in anchors (Glor departed the newscast in May), but the year-over-year audience losses can still be traced to the final months of Pelley’s tenure in the anchor chair.

Nevertheless, the network’s powers-that-be are quite bullish on O’Donnell’s abilities to deliver a compelling evening newscast.