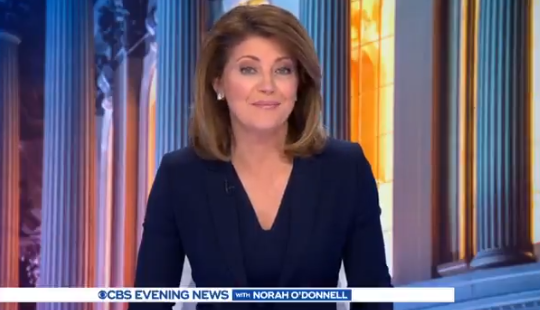 O’Donnell reported that it came down to a technical failure.

For those just catching up— From 6:30-6:33 p.m. ET last night, instead of seeing O’Donnell on their TV screens, CBS station viewers saw three minutes of network promos. Then, at 6:33 p.m. ET, the feed from CBSN, the network’s streaming news service, suddenly appeared on all CBS East coast stations, as opposed to the CBS Evening News. At the end of the day, East Coast viewers were still able to get a dose of national news from CBS, albeit in unorthodox fashion.

“Like so many of you, for two months, we’ve been figuring out how to work from home with limited access to our offices and our usual technology,” said O’Donnell.

To be fair, CBS News is in fact dealing with obstacles other newsers aren’t. The CBS Broadcast Center in New York was shut down March 11 due to multiple cases of Covid-19, and it has yet to re-open. The network has been primarily routing the newscast via the D.C. bureau, which is where the Evening News and Face the Nation both originate from.

Since then, the broadcast has gone off pretty much without a hitch, up until last.

Still, can’t recall a nightly newscast not being able to go up as planned.

“I’m extraordinarily proud of our small team and everyone at CBS News who all work so hard to bring you this broadcast,” said O’Donnell. “We appreciate you watching each evening, and for your messages of support.”

A note about broadcasting in the era of COVID-19 pic.twitter.com/oiYGv40JfS