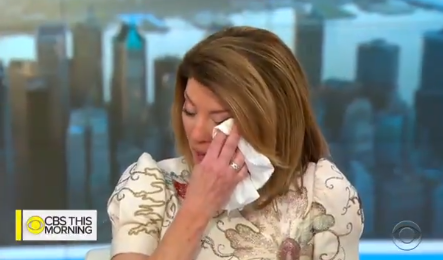 CBS This Morning dedicated a few minutes this morning to Norah O’Donnell, who is leaving the network’s morning show to assume her new role as CBS Evening News anchor this summer.

In addition to going through some of her journalistic accomplishments over her nearly 7-year run as CTM co-host, Gayle King said “we’ve also shared laughs, countless cups of water, tee and coffee and some coke with her at the table.”

King added: “This morning, after 2,444 days, we are saying goodbye as Norah heads off to the CBS Evening News.”

The broadcast then played a montage of O’Donnell’s most notable moments on the broadcast, followed by taped messages from a number of high-profile personalities, including TV newsers such Anderson Cooper, the anchor team at GMA, Katie Couric, and her new evening news competitors Lester Holt and David Muir.

.@NorahODonnell has been an important part of our family for nearly 7 years. She’s asked tough questions, headed into disaster zones, given survivors a voice and shared the stories of people around the world.

We’re now saying goodbye as she heads off to @CBSEveningNews. ❤️️ pic.twitter.com/NPwJ5jczIx