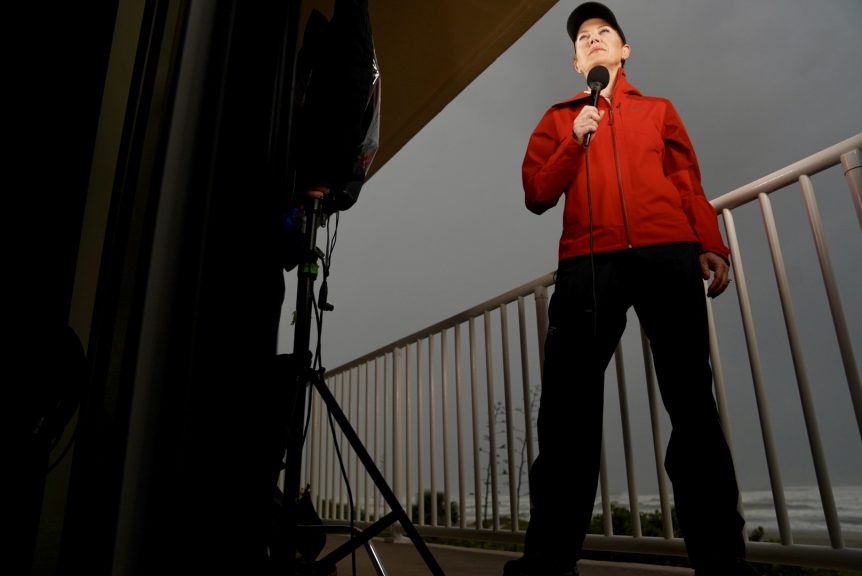 She’s doing some reporting from the Bahamas today, a nation which has been ravaged by Dorian, and is going to broadcast tonight from the Opa-Locka Coast Guard Station in Miami Dade.

We checked in with O’Donnell Tuesday night. She was in Cocoa Beach, a small city just south of Cape Canaveral.

“So far we’re seeing heavy winds and intense bands of rain,” O’Donnell told us. “I’ve been surprised by how many people chose to stay and ride out the storm despite mandatory evacuation orders. Thankfully our team is safe at a hotel that has been evacuated but allowed a small number of essential personnel and media to stay.”

O’Donnell has spoken with local officials in Cocoa Beach, who say they’re most concerned about winds above 50 miles per hour and storm surge. However, Cocoa Beach city manager Jim McKnight, O’Donnell told us, acknowledged the latest projections of Dorian’s track made him optimistic.

It’s presently moving parallel to the coast of Northeastern Florida, according to the National Hurricane Center.

Since taking the helm of the CBS Evening News in July, about a month and half ago, O’Donnell has been busy covering major news events all around the world. On her first week on the job, she reported live from the Kennedy Space Center (near where she was stationed for her Dorian coverage on Monday and Tuesday) for the 50th anniversary of the Apollo mission. In August, she was in El Paso right after the domestic terror attack at the Wal Mart.

O’Donnell’s first broadcast as the anchor of the CBS Evening News was July 15. While the newscast has gotten off to a bit of a slow start ratings-wise, O’Donnell says she’s growing increasingly more comfortable in her new role.

“I’m really proud of the journalism we bring to our audience every night. Especially with stories like Hurricane Dorian, these types of news events remind me that it takes a huge team of professionals to put these stories on the air,” said O’Donnell. “It’s an amazing thing to be a part of.”

O’Donnell credits Barbara Walters as a professional hero of her’s, and told us she received a kind note from the TV news icon when news broke that O’Donnell would be the anchor of the CBS Evening News.

“Barbara Walters, wrote and reminded me that this business is not an easy one, but that the work we do is incredibly important,” said O’Donnell. “I appreciated hearing from her and the other journalists who have held this role.”

Considering all the changes in how people consume news these days, what will the legacy evening newscast look like in, say 15 years? Will it even exist at all?

“I can’t pretend to know what the Evening News will look like in 15 years, but I do know that Walter Cronkite inaugurated the 30-minute evening newscast in 1963, and that still endures today – more than half a century later,” said O’Donnell. “Cronkite also said that ‘journalism is what we need to make democracy work,’ and I’m more convinced of that than ever.”