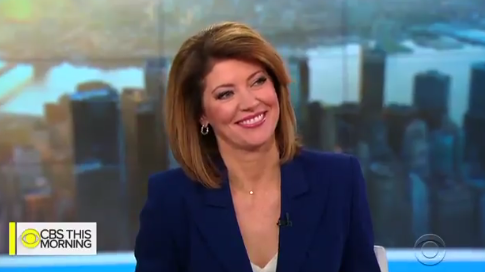 The overhaul at CBS News is complete (for now), with CBS This Morning co-hosts Norah O’Donnell and John Dickerson getting new roles at the network.

CBS News president Susan Zirinsky has made a significant mark on CBS News and the TV news industry as a whole by naming O’Donnell the new anchor of the CBS Evening News. She will replace Jeff Glor, whose first newscast was December 4 2017.

O’Donnell -who will take on the new role this summer- will also serve as the broadcast’s managing editor, and will continue her role on 60 Minutes.

“Norah is one of the leading journalists of our time. Her outstanding reporting, incisive interviews and dedication to the truth will distinguish the CBS Evening News every night,” said Zirinsky.

“The news should rarely be about us, and sometimes what you read isn’t even true.” — @GayleKing https://t.co/sWsX6u46Ro pic.twitter.com/u2y03I9sDw

The CBS Evening News will also move to Washington.

“It’s incredibly humbling to accept this position,” O’Donnell said during the broadcast. “I was looking through some things that Walter Cronkite said. He said: ‘ I can’t imagine a person becoming a success at life without giving everything they’ve got.’ So I’m going to give this everything I’ve got. At CBS News, I don’t stand on the shoulders of my colleagues, they carry me on their backs.”

O’Donnell is the third woman to anchor the CBS Evening News, following Connie Chung and Katie Couric. ABC’s Diane Sawyer anchored World News in the not too distant past, and Judy Woodruff presently anchors PBS NewsHour.

The new CTM team launches May 20.

Dickerson, former Face the Nation moderator-turned CBS This Morning co-host, will move to his third CBS News program in fewer than three years. He becomes a 60 Minutes correspondent and will contributing anchor for the network’s special political coverage.

“As a family, we used to gather around and watch 60 Minutes on Sunday nights,” said Dickerson. “That stopwatch ticking is in my head and has been since I’ve been a little kid. So that little kid is pin balling all over the place, but as a 60 Minutes correspondent I have to have some decorum so I’m not just totally going to flip out.”

The trio announced the news at the top of this morning’s broadcast, and addressed Friday’s news reports concerning potential changes.

King was especially troubled by the New York Post headline saying that she had been trying to push O’Donnell out. She remarked on-air that she would never try to do that to O’Donnell, and they have had 7 great years together.

“I look at Susan [Zirinsky] who if you haven’t heard outside the building is a bad ass. She’s our president. She’s announced there’s going to be some changes. She’s going to look at the lay of the land and decide. She could have come in in with a weed whacker and we’d all be on 57th Street going: ‘Taxi.’ But what she decided to do is stake a look and see what she thought would work best and what job would serve our role. This business is about ratings. When ratings don’t work, they’re making changes they believe will lead to better things. I believe it too. I know I’m going to give it 110% as will you both.

Even though we’ve had a lot of bad press coming from inside the building which is disturbing to me because I think most people that work here support, respect, admire, cheer each other on. Even going to Washington was Susan’s idea, not yours, but it will make everything better and different. I’m cheering you on.”

“As we transition the Evening News to Washington, we are discussing opportunities for Jeff to remain with CBS News and continue providing the same substantive, trusted reporting that he has been offering for the past 12 years,” Zirinsky said in a statement.

“Jeff Glor as we know is a fantastic journalist and trusted colleague. He has shed light on important issues and highlighted humanity in the world. His conversations, you should know, with CBS continues and we hope he will continue working here,” said King.

Dickerson made a point of saying that he was pleased Glor’s accomplishments were noted in the broadcast open.

The moves come after a rough year and a half for the network, which included mediocre ratings for its morning and evening programs.

While ABC has Good Morning America, and NBC has Today, CBS News’ national morning programming has always lagged behind. But the network appeared to have something positive going with the launch of CBS This Morning in 2012, with veteran TV newser Charlie Rose as the centerpiece.

The show has remained in third for its duration, but it went on an impressive ratings run in the months leading up to and after the 2016 election.

That momentum seemed to come to a screeching halt after the November 2017 departure of Rose, a departure which came a day after The Washington Post published a stunning story about eight women who had accused Rose of sexual harassment.

Rose wasn’t the only CBS Newser knocked out of the company in the past year and a half. There were highly-publicized scandals involving former CBS News chairman/60 Minutes ep Jeff Fager and then CBS CEO and Chairman Les Moonves, which led to their respective ousters in 2018.

Looking to start from scratch, the company replaced then-CBS News president David Rhodes with Zirinsky in January. The first woman to head CBS News, Zirinsky (known to many inside the CBS Newsroom as “Z”) officially assumed the role of CBS News president and senior executive producer on March 1 after serving as senior executive producer of 48 Hours.

She’s got her work cut out for her. Let’s see how she does.