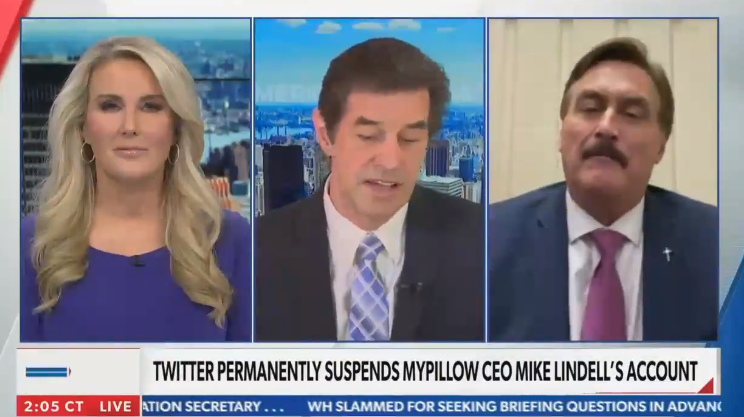 Lindell was brought on the network Tuesday to discuss Twitter’s decision to ban him for consistently spreading bogus information about the 2020 presidential election.

In the context of his being taken off Twitter, Lindell decided to attack Dominion Voting Systems, a voting software company that has become the subject of accusations related to the 2020 election. He said his Twitter feed “was taken down because we have all the election fraud with these Dominion machines. We have 100% proof.”

Any criticism of the company on Newsmax’s airwaves is a big no-no these days. Last December, the network had to issue an on-air clarification concerning its own coverage of voting software company, and its connection to the 2020 U.S. presidential election after being tagged with legal threats.

Bob Sellers, who was co-anchoring the 3 p.m. ET hour alongside former Fox News host Heather Childers, wasn’t having it, and chaos ensued.

“Newsmax and its anchor only wanted to make clear that it has found no evidence of software manipulation involving the election,” a Newsmax spokesperson told TVNewser in a statement Wednesday. “However, Mr. Lindell is entitled to his own opinion and has a different viewpoint than ours.”

Sellers is not an unknown figure in TV news circles. He joined Newsmax last March, and previously held anchor roles at CNBC in the late 1990s early 2000s, and Fox News where he spent 4 years starting in 2002. Sellers left Fox News in 2006 for Washington’s WTTG before moving to Nashville’s WSMV (NBC) and WZTV (Fox).

Lindell returned to Newsmax later that day, and this time he did not repeat what he said earlier about the 2020 election. He spoke with anchor Rob Schmitt about Twitter banning his personal account and the MyPillow account.

At one point Lindell even talked about the MyPillow-Newsmax business relationship, saying, “You guys have been great.”

He also spoke with Schmitt about businesses that have dropped MyPillow and the upcoming impeachment trial of Donald Trump.