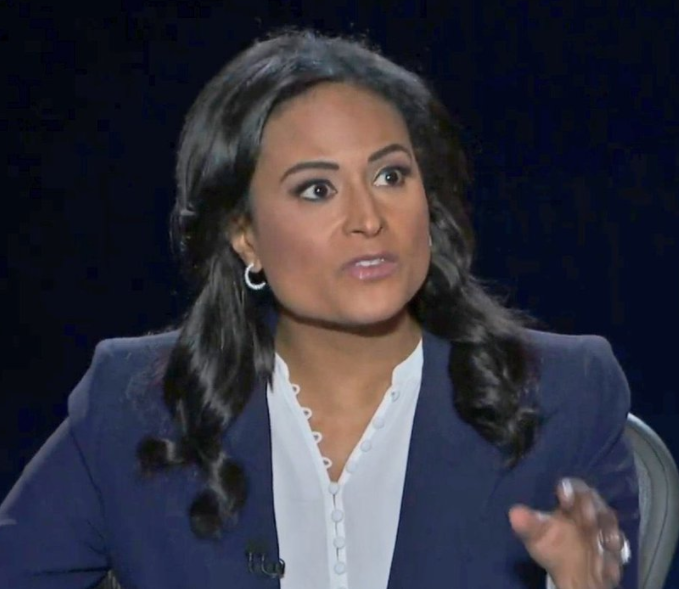 Tonight, President Donald Trump and former vp Joe Biden will go head to head for the second and final time in a presidential debate, sanctioned by the Commission on Presidential Debates. Tonight’s debate is taking place at Belmont University in Nashville, Tenn., and NBC News White House correspondent Kristen Welker is the moderator.

Welker co-moderated an MSNBC Democratic primary debate late year, but this will be her first time moderating a presidential debate.

The stakes are extremely high, and shows of support have been pouring in for Welker in recent days. She seems to be respected by newsers across multiple networks. That said, everyone figured an esteemed journalist and moderator like Chris Wallace would have no issues controlling the proceedings heading into the first debate, yet that didn’t exactly happen.

A unique addition to tonight’s event is Trump and Biden will each have two minutes of uninterrupted time to speak at the beginning of every 15-minute segment of the debate. The candidate not speaking will have his microphone muted. After that, there will be time for back-and-forth with both candidates’ microphones open.

A producer from the CPD will have control over the microphones, not Welker.

The most recent presidential debate (Sept. 29, moderated by Wallace) hauled in 73.1 million total viewers watching across 16 Nielsen-measured networks. That’s the second-largest total audience for a presidential debate ever, only behind the first debate between Hillary Clinton and Trump in 2016, which drew roughly 84 million.

It remains to be seen what tonight’s event will draw.

If you’re not sure where or how to watch tonight’s event, we’ve got it all laid out for you …

Below, Ari Melber, as is his custom, asking Twitter followers for their go-to debate snacks and drinks.

It’s not a last meal but it is the last debate — what’s your ideal food or drink to go with it?!

I’m beaming watching Kristen Welker. Such an amazing moment for her and for all who know of her hard work and dedication to journalism. Go girl!

Be careful what you wish for. Moderator Kristen Welker says she’s looking forward to a really “robust” debate tonight.

Consensus seems to be Welker is doing quite a fine job:

So far @kwelkernbc is in command

Kristen Welker is doing an excellent job so far.

Kristen Welker is doing a good job of asking narrow, focused questions, which keeps this from going off the tracks.

Yes! @kwelkernbc asking Biden about Hunter!! Good for her.

.@KWelkerNBC has been fantastic tonight. There were lots of doubts she’d broach the Hunter Biden topic, but she did, in a smart and fair way. #Debates2020

What a brilliant job @kwelkernbc is doing. Poised, confident and in control—while at the same time allowing a free exchange between the candidates.

Tonight @kwelkernbc is doing a fantastic job retaining command of this #PresidentialDebate2020. Her years of experience asking questions at the White House, especially to President Trump, really shows here. 🙌🏼

Thank you @kwelkernbc !!!!
Finally a question about immigration during the debate.

Thank you @kwelkernbc for giving the American people a real #DebateTonight

Adding to the debate recap. Kristen jumped in on POTUS more often, but Trump got 41 minutes to Biden’s 38. So she was trying to keep them even. She was a strong moderator.

A certain NBA star seems to be a fan as well!

Best moderator we’ve had yet!

One of the more surprising reviews of the night came halfway through the debate from … Trump himself.

“I respect very much the way you are handling this, I have got to say,” Trump tells @kwelkernbc. This comes after he portrayed her as a partisan left-wing hack over the last few days.

“First of all, I’m jealous,” Fox News anchor Chris Wallace, who moderated the first debate, admitted. “I would have liked to be able to moderate that debate and get a real exchange of views rather than hundreds of interruptions.”

Bret Baier said “it was a debate of substance,” and Brit Hume said he felt Trump “gave his best debate performance ever.” He also complimented Kristen Welker.

The two minute response seemed to work well,” added Martha MacCallum. “I think that President Trump is probably going to feel like he hit his mark a lot better this time than he did last time we saw.”

“He [Joe Biden] looked at his watch at 10:22PM tonight. There was that famous moment with H.W. looking at his watch, and we had one of those tonight as well.”

Over on ABC, Rahm Emanuel said that Trump played to the script, “for about 40 minutes, and then the mask came off.”

George Stephanopoulos added: “For the first 40 minutes or so, it seemed like a relatively normal debate, as the candidates laid out their positions on the Covid crisis. Got heated about 40 minutes in when Joe Biden unexpectedly went on offense over Donald Trump and his personal lawyer, Rudy Giuliani.”

“President Trump responding with a series of unverified and misleading and false charges about Joe Biden and his business dealings and the business dealings of his son. And then some harsh clashes. We didn’t have the kind of interruptions we saw in the first debate. The mute did appear to work, at least for a time. But there were harsh clashes on health care, the minimum wage, children separated at the border under the trump administration policy. And the big issue of character and race.”

NBC’s Chuck Todd gave a shout out to his colleague, Welker, saying, “I think she had a tremendous command of this debate and I think it actually helped facilitate.”

Todd added that he found it curious that Trump was acting like the challenger candidate and not the incumbent throughout; attacking Biden and then deflecting.

CNN’s resident fact-checker Daniel Dale: “Trump was better behaved tonight but he lied more.” Described fact-checking him like Lucy and Ethel in the chocolate factory: “There are so many [lies] going by it’s hard to know which ones to pick up.”

CNN’s Jake Tapper added: Trump “didn’t set himself on fire like he did at the first debate,” adding, “But I don’t see anything that will change the trajectory of the race in a significant way.”

MSNBC’s Nicolle Wallace: “Joe Biden won this debate running away. Not only did Donald Trump lie — all the lies you just singled out were in the first 15 minutes of an hour and a half-long debate.”

CBS’ John Dickerson: “This was an actual debate. As opposed to some of the other things we’ve had.”… [President Trump] needed more than just adequate. He needed to do something to change the dynamic of the race, and I don’t think there was anything in tonight that changed the dynamic of the race.” … “‘It’s a very low bar when you say the goal is not to do what you did last time.”

On Trump’s curious claim that he’s “the least racist president,” Dickerson said: “As the nation’s top birther for five years, President Trump can’t say that – he has to jump over that and say something else other than pure assertion.”

“This was much closer to a real debate than what we saw the last time …,” said PBS NewsHour anchor Judy Woodruff. “A much more valuable debate for the American people than what we heard in the first debate.”

From FBN’s Neil Cavuto: “Again, a stunning development in the debate that had a great deal of substance and was well handled by NBC’s Kristen Welker, who aggressively kept tabs on each gentleman and tried to make sure they didn’t go off topic. A lot of times they did veer into other things such as scandals and all this controversy you hear about Ukrainian money and Hunter Biden and whether he’s using his dad as sort of like a nudge to get still more contracts in Ukraine. That got the vice president to respond or the president to sort of go back and forth on this notion of Donald Trump’s ties to China and bank accounts and the like. It could have gotten very, very muddy. It did not, because they just kept moving on from one hit to another. But it was aggressive. It was fast. And I followed debates for decades here. I got to tell you, this is among the more substantive that I can ever remember.”

Finally, “Somebody owes our colleague Kristen Welker an apology,” Brian Williams said on MSNBC immediately after the debate ended. “Yeah,” Rachel Maddow added, “she’s owed an apology by the president, who attacked her over and over and over again heading into this event tonight.”