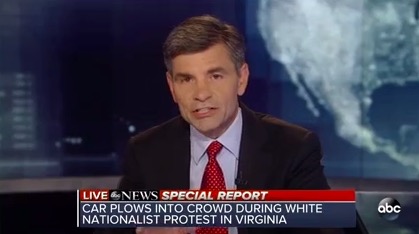 A helicopter crash late Saturday that killed two people is being linked to the violence, though it’s not clear just yet how they’re connected.

A few hours earlier, around 2 p.m. ET, a car plowed into a group of counter-protesters killing one person. The driver is in custody.

At 2:29 PM ET, Jose Diaz-Balart anchored an NBC News Special Report on the unrest. George Stephanopoulos broke in with an ABC News special report at 2:50 p.m.

Cable news coverage continued into the evening. Joy Ann Reid is anchoring evening coverage on MSNBC, while Fox News’s Julie Banderas will anchor a 2-hour Fox Report until 9 p.m. at which point Jeanine Pirro will pick up and anchor until 11 p.m.

Car plows into a crowd of peaceful protesters demonstrating against white nationalists in #Charlottesville. pic.twitter.com/GUEQRBw790