NEXT:Tucker Carlson Addresses Resignation of His Former Top Writer: 'We Don't Endorse Those Words, They Have No Connection to the Show'
PREVIOUS:Saturday, July 11 Scoreboard: Jesse Watters Was No. 1 Among Adults 25-54, Jeanine Pirro Was Most Watched 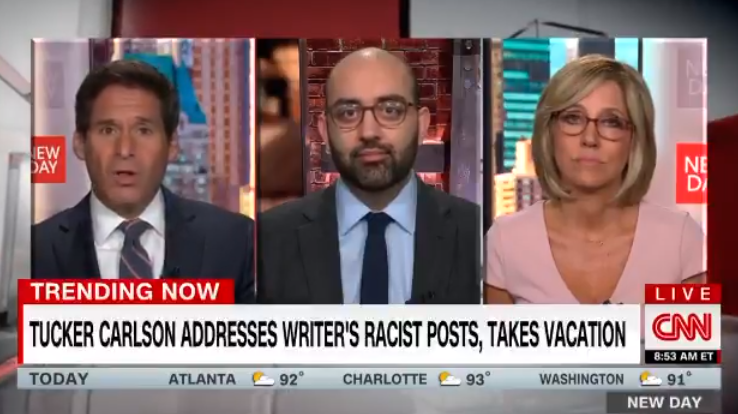 Well, it seems at least two personalities from rival networks weren’t impressed with what Tucker Carlson said on his show last night.

CNN New Day with John Berman and Alisyn Camerota brought their colleague Oliver Darcy onto the program this morning to discuss Carlson’s response to his now-former top writer’s resignation from Fox News.

Darcy wrote an in-depth story last week about how the writer, Blake Neff, had been using an online alias to post racist, sexist and homophobic remarks in an online forum named AutoAdmit for many years and as recently as late June.

The story by Darcy led to Neff’s resignation.

“That was a sham, that wasn’t an apology at all,” Berman said of Carlson’s response, shown below. “What the hell does he mean when he says: ‘You shouldn’t attack people for the qualities they can’t control?’ Tucker Carlson can’t make himself say ‘racist.’ Say the word: ‘racist.’ Attack people for qualities they can’t control? You know, that sounds coded to me. What does that mean? You know, I can’t control being white or Black or Jewish or gentile? What the hell does that mean? I can’t believe—actually I can believe that Tucker went on and did this last night and then to set up being holy as the opposite of being racist. Like Oliver, it’s your fault, it’s your fault for doing this reporting on this guy who wrote stuff for Tucker.”

“That was a sham. That’s not an apology at all,” @johnberman says about Tucker Carlson after the Fox News host addressed an ex-staffer’s racist posts, first reported by @oliverdarcy.

“Say the word: racist. What this guy did was racist and misogynistic.” https://t.co/758GcZG9Jg pic.twitter.com/haPofPGRka

Below, Carlson’s original minute-long response on the matter during last night’s broadcast.

“Over the weekend, you may have seen stories about a writer on this show called Blake Neff,” Carlson began. “For years, since he was in college, Blake posted anonymously on an internet message board for law school students. The posts became public. Blake was horrified by the story, he was ashamed. Friday afternoon, he resigned from his job.

“First, what Blake wrote anonymously was wrong. We don’t endorse those words. They have no connection to the show. It is wrong to attack people for qualities they cannot control. In this country, we judge people for what they do, not for how they were born. We often say that because we mean it. We will continue to defend that principle, often alone among national news programs, because it is essential. Nothing is more important. Blake fell short of that standard and he has paid a very heavy price for it.

“We should also point out to the ghouls now beating their chests in triumph in the destruction of a young man that self-righteousness also has its cost. We are all human. When we pretend we are holy, we are lying. When we pose as blameless in order to hurt other people, we are committing the greatest sin of all, and we will be punished for it. No question.”

Carlson ended his broadcast by saying he’s going on a fishing vacation and will return to the show on Monday.

Fox News CEO Suzanne Scott and president, executive editor Jay Wallace condemned the posts over the weekend, calling them “deeply offensive, racist, sexist and homophobic.” The management duo seems to have condemned the remarks much more forcefully than Carlson himself did.