NEXT:Networks Move From Coverage of Electoral College Vote Counting to Coverage of Rioting at U.S. Capitol Building
PREVIOUS:Tuesday, Jan. 5 Scoreboard: CNN Is No. 1 in Demo, MSNBC No. 1 in Total Viewers for Coverage of Georgia Senate Runoffs 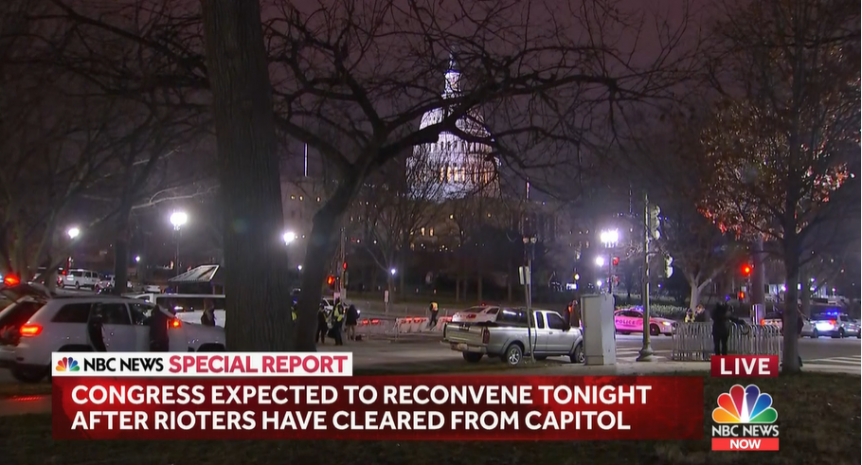 The television news networks have been covering these events throughout the afternoon and into the early evening, and the broadcast networks will go with live coverage of the U.S. Capitol riots an resumption of the electoral college vote counting in prime time, preempting their respective regularly scheduled Wednesday night slates.

NBC has been non-stop with live news coverage since 1 p.m. ET, when the electoral vote counting coverage started. NBC News’ Lester Holt anchored until 4:30 p.m. ET, and then signed off to get ready for Nightly News. Savannah Guthrie anchored coverage until Holt returned at 6:30 p.m. ET.

As the case with ABC, NBC is staying on live news coverage throughout prime time. Holt and Guthrie co-anchor through 11 p.m. In the Mountain and Pacific time zones, encores of Chicago Med, Chicago Fire and Chicago P.D. will air in their respective timeslots.

For Fox News, Bill Hemmer anchored breaking news of the rioting on the U.S. Capitol during his 3 p.m. hour through 6 p.m. ET, when Bret Baier then took over with a special edition of Special Report.

Chris Wallace, Dana Perino, Martha MacCallum, Juan Williams, Karl Rove and Andy McCarthy have been contributing throughout the afternoon, along with on the ground reporting from Congressional correspondent Chad Pergram on Capitol Hill and Washington correspondent Griff Jenkins and Mike Tobin outside the Capitol.

Telemundo’s live coverage has been anchored by Jose Diaz-Balart and Felicidad Aveleyra throughout the afternoon and into the evening.. senior Washington correspondent Cristina Londono reported live throughout the day from inside the Capitol with other correspondents reporting from outside.

The network’s live coverage will continue until 9 p.m. (although may be extended if events merit), and its coverage is also streaming live on the Noticias Telemundo website and social platforms.