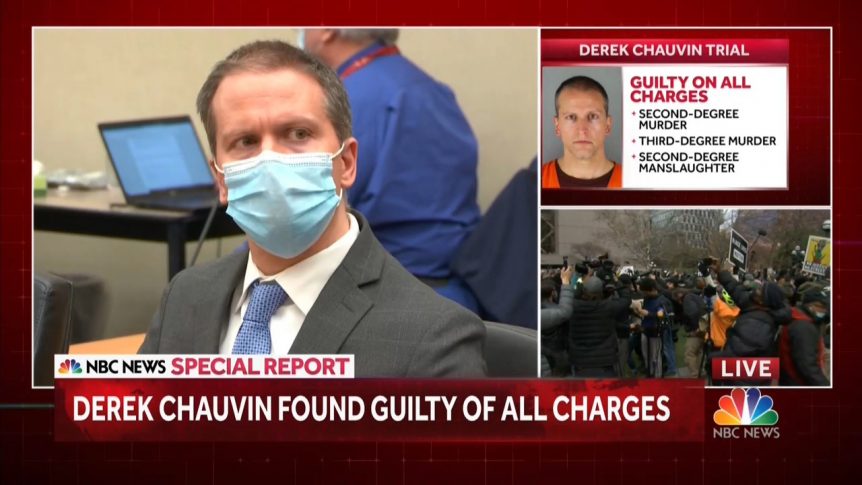 A verdict was reached in the Derek Chauvin murder trial: Guilty on all three charges for the murder of George Floyd.

The announcement was read by Judge Peter Cahill shortly after 5 p.m. ET on Tuesday.

Lester Holt anchored the NBC News Special Report when the verdict was read.

“Derek Chauvin convicted on all three counts. Guilty of second-degree unintentional murder, third-degree murder, and second-degree manslaughter in the death of George Floyd, and leaving the courtroom in handcuffs,” said Holt.

“I think, once the second and the third count came in, guilty, there was just a wave that just rippled across this crowd,” said NBC News correspondent Gabe Gutierrez. “And I think if I could sum it up in one word, Lester, it is relief. Relief from a crowd that had been waiting for this verdict for months. Relief from the community that had seen razor wire, and barricades and boarded up buildings just engulf downtown Minneapolis.” 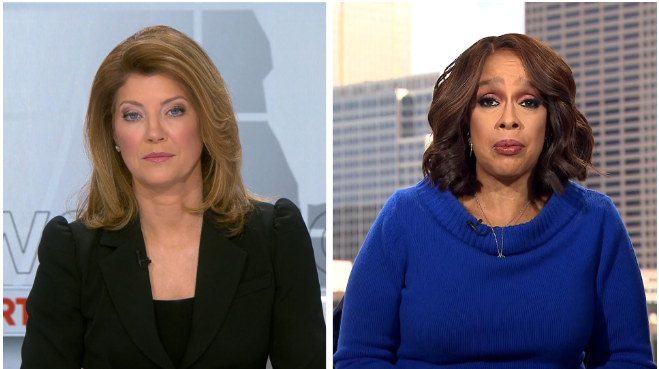 Pegues spoke with people gathering in Minneapolis following the verdict. One told him: “I didn’t have doubts that he was guilty. I had doubts in terms of white supremacy, and white supremacy saying that if you’re white, you can get away with murder as long as it’s a person that is Black.”

Additionally, Elaine Quijano anchored ongoing live coverage on CBSN, with analysis of the verdict and reaction as well as local reporting and updates from CBSN Minnesota.

Over on Fox News, after the verdict was announced, Dana Perino quarterbacked The Five with Martha MacCallum as a guest and Jeanine Pirro, Juan Williams, Jesse Watters and Greg Gutfeld as panelists.

“Clearly, the verdict is supported by the facts-this case was extremely unusual,” said Pirro. “I’ve tried many murder cases and I sat as a judge on murder cases. It is rare that you even get a picture of the victim in a murder case other than maybe an autopsy photo. But here, we had a living, breathing person that the jury was able to relate to everyday, day after day. Watching the trauma of what he went through. Begging for air, begging to breathe. This was an emotional as well as an intellectual decision. And when I say that, make no mistake, the facts are solid on this verdict. This verdict will be upheld on appeal. Right now, what people need to understand is that the American justice system works. It works. The people right believe in Lady Justice. That if we give it a chance, it can work.”

Williams added: “To my mind, it would have been so upsetting, it would have been a kick in the stomach-that’s why I said it would have been emotional-if in this most extreme situation where everybody can see what happened that the jury would have somehow said well, let’s split the verdict or he’s a policeman and we want to give policeman in our great country the benefit of the doubt, so we’ll give him the benefit of the doubt. I think it would have been a kick in the stomach because that would have said that police then have the right to do anything, to anyone, especially to Black people. But what we’re seeing today is really a change and I hope it’s the beginning of a big change in the way that we think about handling crime, handling people, not making judgements based on skin colors and treating people as suspects and not as citizens to be protected. ”

Brian Williams and Nicolle Wallace co-anchored for MSNBC, with Williams remarking, “The whole world just got to see that: Derek Chauvin led away in handcuffs. Depending on the disposition of sentencing, Derek Chauvin may not see the light of day again. If you were watching, you heard, guilty on all charges. Manslaughter 2, the lesser charge, guilty; murder 3, guilty; murder 2, felony murder, guilty. Nine minutes and 29 seconds. Prosecution told the jurors, believe your own eyes. In this case, they have.”

Joy Reid then jumped in: “My first thoughts as I heard that verdict being read were for George Floyd’s family. You and I both interviewed members of his family, his brother Philonise, his daughter, who famously yelled out ‘my daddy changed the world.’ And I think that what just happened today, you know, I take Jason’s caveats to heart, but even if it took 10 police officers to bring about a verdict that will bring justice and a sense of peace to this family, I’m good with that. The reality is, the verdict today was not just against this police officer. It was against the kind of—that was mounted for him. It’s the same kind of defense that was mounted in the Rodney King case, the Black Superman who, no matter how much violence you commit against his body, can rise up, even from the dead in the case of George Floyd, and pose a threat. The thought of a black man as an inherent threat, a black body as an inherent threat, that’s what Derek Chauvin’s defense tried to use in his defense.

“This was the scene in south Minneapolis just moments ago….Embracing one another and in many ways for that community and for the people who have gathered there it’s been an extraordinarily long year in this country,” he said.

Strahan told Muir, “David, I appreciate you having me on and I think my reaction is looking at the verdict and you feel that it is justified. You feel maybe this is the changing of the tide. Hopefully you no longer get away with the killing of a Black person no matter who you are in society. Not just other police officers, but for anyone. And you look at this case and it definitely—Black people in America have been treated in a different way when it comes to dealing with the police. This is also about just humanity of the whole to see this as a human being. It was disturbing. At the end of it all, I think that you see people celebrating and you see people are happy, but it does not bring George Floyd back… you had Breonna Taylor, you had Philando Castile, you had all these others that did not get the justice that we see here in the case of George Floyd, but you still have the family who suffered through the fact that yes the verdict is guilty, but yet he will never walk through their door again. But as a whole, as a Black man in this country, as Black people in this country, we feel that hopefully this is a changing of the guard. A change that will show that people of color will be treated with the respect and dignity of everyone else and it won’t be an afterthought. We won’t be surprised when something like this happens and the verdict is guilty. We won’t be on the edge of our seat hoping that the verdict is guilty when it is very hard to understand how it couldn’t be.”